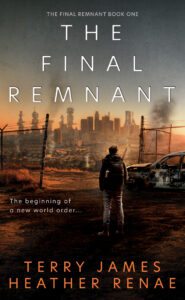 Fully realizing that most Rapture Ready family folks don’t generally prefer fiction, I nonetheless implore you to embrace this novel. I’m particularly doing so because of my concern for the young adults who have been largely ensnared by this perverse culture that Satan and his minions have managed to inflict and afflict.

This is the first book in a series by Heather Renae—an excellent novelist—and I believe the Lord has given us to present. I believe this story and the ensuing series will pull the young adult reader into His Holy Spirit’s orbit. Thus, many will—we pray—begin to understand the serious nature of where all anti-God deception is leading.

Please, get this book for your children and grandchildren. Encourage them to read the story. I believe many will become intensely interested in considering putting Christ at the center of their lives while the world around them gets more and more out of control.

God is still in complete control, and the young adults you love need never suffer the fate those in this story experience. Heather has created a tremendous storyline about these most crucial matters of eternal destiny. My part has been to help guide in Bible prophecy truth—all under the Holy Spirit’s direction.

Any moment now, believers in Jesus Christ might hear His shout, “Come up here!” While you pray for them and try to reach them with the truth, please, share this with them.

Another very important note! Heather is on TikTok making educational Revelation videos. For grandparents in particular –if you want your grandkids to learn about Revelation in a fun, in-depth way, you will want to follow Heather on TikTok. The link is below. So far, she has 80 thousand followers! This means this offering for the kids is very well received. Please avail yourselves of checking this out for the children in your life. –Terry James

THE FINAL REMNANT :: By Terry James and Heather Renae

A story that will become reality at any moment

Life was hard before the Day of Vanishing. Some call it the Rapture. If it really was the Rapture, it proves Caden’s theory that God is totally bogus… or worse. Whatever. Now, life’s unbearable. After all the good people disappeared into thin air, the world fell apart. Unmanned planes fell from the sky, empty, moving cars crashed, and disaster struck. The bodies piled up. Those who were left banded together in little, ragtag gangs, fighting over scraps. And what was God doing through it all? Watching it burn.

Have you ever wondered what the first moments after the Rapture will be like for those instantaneously finding themselves in the worse time of human history? It is the vilest—we can be sure—because God, Himself, has foretold it so.

Jesus said of time following the disappearance of millions, “For then shall be great tribulation, such as was not since the beginning of the world to this time, no, nor ever shall be” (Matthew 24:21).

Caden is only armed with a baseball bat as he fights to keep his younger brother and himself alive. They join a gang, scavenge ghost towns, and avoid new predators who stalk in the shadows. Mankind is no longer the apex predator.

Giants roam the lands. Though many believe them to be heroes, Caden knows better. Heroes don’t eat people. Animals also mutated oddly, gaining extra tails and a new set of fangs. No one knows why they mutated, but the freaks of nature should best be avoided. Unfortunately, that’s not the worst of it.

There are the haunts or demons—or whatever you want to call them. These monsters enjoy human being with a side of fries. They’re invisible to everyone except Caden. Lucky him. He doesn’t know why he’s the exception… and he hates it. It’s probably God up to His tricks again. Now and then—without warning and at the worst times—the haunts show themselves. They’re always grinning from around the corner or stalking from hidden places, and Caden doesn’t understand why they haven’t eaten him yet.

Sometimes, his ‘gift’ can be handy—letting him scavenge where haunts have scared others away. It’s a useful ability, yet it can lead to far greater troubles. Caden learns way too late that it’s dangerous to speak of his gift. Most people treat him like a weirdo, but few want to make him their employee—one who never clocks out and is fine with not getting paid. A slave.

When Caden realizes his baseball bat is little help against guns and larger, meaner gangs, he and his brother decide they’re unable to make it on their own. They need help—someone bigger and stronger on their side. Someone like God if He were to ever come through…. But Caden is running out of options. And compared to his desperation, his hatred of God is getting smaller by the day. Maybe all that God and faith stuff isn’t too bad. Forced to decide what he wants more—to keep his brother and himself alive or keep hating God—Caden comes to terms with the fact that any day could be their last.

The Final Remnant is a novel. A work of fiction. Its story goes deeply into the time of which Jesus forewarned. The horrors of that tribulation, thankfully, are not yet reality. The taking from planet Earth of believers in Jesus Christ—His Church—is yet future on God’s Prophetic Timeline.

However, the reality of that twinkling moment is on the cusp of shocking the world. Signs are everywhere that Christ’s call to the Church will happen at any second. Issues and events in the hourly news make certain Jesus’ words of great promise to believers is perhaps only a heartbeat away.

“And when these things begin to come to pass, then look up, and lift up your heads; for your redemption draweth nigh” (Luke 21:28).