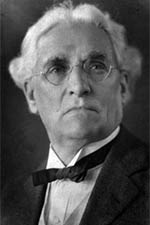 Henry Clay Morrison – Born on May 30, 1857, he was very young when his parents died and was raised by his grandparents in an atmosphere of spiritual revival and with a strong faith in Jesus Christ as Lord and Savior. The young Morrison felt the call to the ministry at an early age. At 19 he was licensed to preach and was a circuit rider and station pastor. He later left the pastorate to devote himself to evangelism and publishing a religious paper called “The Old Methodist.” He served as president of Asbury College from 1910 to 1925 and again from 1933 to 1940, and was instrumental in founding the Asbury Theological Seminary in 1923.

The Confessions of a Backslider

Baptism with the Holy Ghost

Will a Man Rob God?