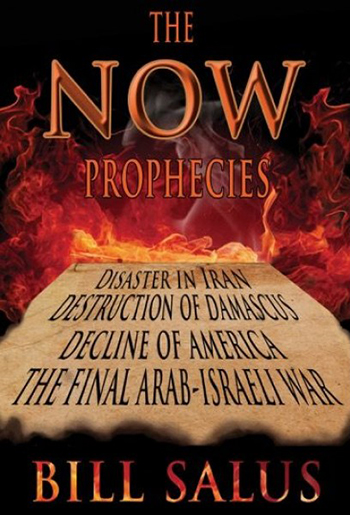 Bill Salus sat to my right first time we met at the dinner table, best I remember. It was during the time of the Christian Book Sellers Association (CBA) Convention held at Orlando, Fla quite a few summers ago.

Bill’s enthusiasm for the Lord’s work and for his first book riveted my attention. Yet, it was with quiet, humble demeanor that he explained his God-directed desire to get into ministry full-time after a dynamic career in business. And, did he ever!

The author of The NOW Prophecies has, since that dinner meeting in the Peabody Hotel restaurant, demonstrated book after book, media interview after interview and convention presentation after presentation that the Lord’s hand is indeed upon him and his ministry efforts.

Once I would have looked with eyebrow raised in skepticism at someone who says the title of his book was inspired by a dream given him by the God of heaven, followed by a strange, early-morning phone call. But, that was before I was awakened by such a dream many years ago with a similar nudge and years later by a heavenly vision when my heart stopped on three separate occasions on Good Friday of April 22, 2011. –A story some who read this review might remember my relating.

That God is getting His end times alert out through Bill Salus’s work, I have no doubt. Bill’s faithfulness to carry out the commission from on high is amazing and intriguing to witness. Even more, it is comforting. The Lord is telling the world to get ready. Now, the time of fulfillment of His prophetic truth is at hand.

The NOW Prophecies is the latest of the author’s piercing examinations of things to come. Like with his other books, the reader is introduced to deeper aspects and meanings of specific prophecies than explored and unveiled by previous work.

Salus views Bible prophecies through a unique perspective, breaking them down into three categories. Those are 1) Now prophecies; 2) Nextprophecies; and 3) Last prophecies.

His new book is so in-depth in examination of what he calls the NOWprophecies that the space given for matters involved in this review inhibits going into what he calls the Next and Last prophecies. These will no doubt be covered to the same, in-depth extent in Bill’s subsequent work. As a matter of fact, his delving into those things yet to come are covered in a number of his excellent volumes already on the market. The latter two categories involve, basically, foretelling’s of things to come following the rapture of the church.

So, what are the NOW prophecies?

The author defines them as being those prophecies that have been manifesting since 1948 and the rebirth of Israel into modernity. They continue to unfold and will do so until the Gog-Magog prophecy of Ezekiel 38, scheduled sometime in the near future. He lists each of these NOW prophecies as follows.

Bill Salus has a phenomenal grasp of things scheduled on God’s time line. Although I don’t agree in every minute detail with the author’s view of Bible prophecy—we all have our own nuances of thought in these matters—I must none-the-less say that his “take” on Bible prophecy is, I’m convinced, God-influenced and thoroughly backed with scripture.

I’m a big fan of Bill Salus. This book certainly adds to that admiration of his excellent work. You will want The NOW Prophecies. It will open your understanding to what to expect in the days just ahead, from heaven’s perspective.