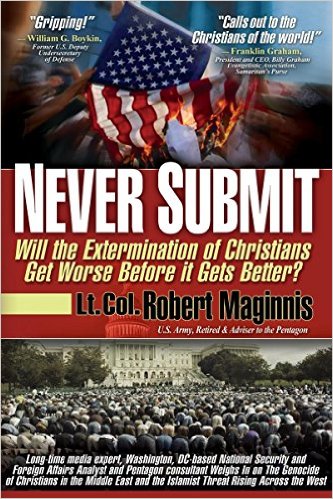 It is unimaginable for us in perhaps the most liberty-blessed nation ever to exist that we might come face to face with a band of marauders who force us to our knees and demand we deny our own beliefs and except theirs. We wonder what we would do if that happened, then quickly turn our thoughts back to our daily lives.

When we think on it more deeply, however, we realize that these decisions have been required to be made in America. Remember the little girl who was asked by the Colorado high school students murderer whether she would reject Christ? Her answer was “no.” The shooter then fired a shot into her face as  she crouched near her desk.

Increasingly, there are reports of such evil in our nation, even to the point of actual beheadings, such as the Islamist fanatic in Texas who decapitated  his fellow worker, a woman who apparently wouldn’t see things his way. The disease called jihad is growing across the planet and has infected even our own neighborhoods. Check into how things are developing in such places as Dearborn, Michigan, as one example of the invasion we face.

If radical Islam isn’t confronted and stopped, it will overrun all of civilization. The stated aim of the hellish leadership of the Islamic State (ISIS) is to establish a caliphate for Allah that is worldwide. They are making substantial inroads toward accomplishing their goals, as our hourly news attests.

This plague of Islamist evil beginning to come part of our minute-by-minute news prompted me to review the book I believe is the most crucial volume to date exposing this deadly scourge. NEVER SUBMIT by Lt. Col. Robert Maginnis, an expert in Mideastern affairs and noted contributor to news and analysis from that region for FOX News and other national and international forums, presents an in-depth look at genocide being perpetrated by fanatic Islamists against Christians and other victims of that satanic rage.

This is a must-read for understanding what we face in the coming days and how we must confront and defeat this burgeoning threat.

Maginnis, retired from the U.S. military and long-time head of a consultancy to the Pentagon and other clients, sheds light on the anger and absolute evil taking place in that most volatile region on earth. He does so with a unique understanding of the eschatological (prophetic end times) implications involved. His is a truly knowledgeable understanding of the dynamics driving the rage, because that understanding is steeped in a belief in and study of Bible prophecy as part of his thinking.

The author was kind enough to seek my thoughts on the Bible prophecy portions of NEVER SUBMIT. I can attest that this is a book that speaks with a clarity of vision for the present movement in that most dangerous part of the world and gives an absolutely thorough view of what is scheduled, according to God’s Word.

Christians in the Middle East are fleeing their homes or dying at the hand of Islamists, creating the very real possibility of a successful faith-based holocaust.

The implications of such an outcome for the region and the world are stark: a very fanatical militarized Islamist region that soon might be armed with nuclear weapons to threaten the world with atomic terrorism—and the same insidious conditions that promote Christian genocide there could spread to America. Reversing this very serious threat must be the top priority for Middle East governments and their populations, the so-called moderate Muslim world, Western governments already frightened by rising Islamist threats, and a genuine global response by Christians to rise up around a doctrine that combines moral, civic, and Christian virtue as the guiding light of future political and Christian social action in the Middle East.

Maginnis, in this superb volume, not only outlines the scope of the malevolence that threatens everyone on the planet, but he offers solutions based upon decades of hands-on experience and tremendous spiritual insight based upon  Bible truth. I hope this book gets into the hands of every U.S.  representative and senator–and even our badly-in-need-of-such-truth president. This is truly a book that we ignore at the risk of our own peril.