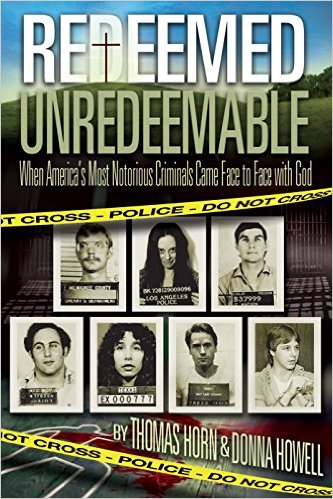 Some years ago, I had considerable correspondence with David Berkowitz, the murderer who carried on his serial killings in the mid-1970s. He was called, of course, “Son of Sam,” the term he gave himself through cryptic writings while still at large in New York City.

He was a completely changed person by the time we wrote back and forth in the period from 2000 to 2010. I sent him books I had written, and we shared a truly Christian, brotherly time of fellowship through snail-mail correspondence. I always wished I could sit across from him in person and talk with him about how the Lord had changed him from the “Son of Sam”to David, the gentleman and gentle man I came to know.

The authors of Redeemed Unredeemable: When America’s Most Notorious Criminals Came Face to Face with God interviewed David Berkowitz as well as interviewed and/or researched in-depth other equally infamous convicted killers, bringing to light how Christ miraculously brought them into God’s eternal family through the once-and-for-all sacrifice of the Lord Jesus Christ on the cross at Calvary. Their interviews and research on other killers have resulted in an absolutely mesmerizing read.

Not since I read Truman Capote’s In Cold Blood has my attention been so riveted to page after page involving human brutality as with this volume. However, it was a far different sort of enthrallment with Redeemed Unredeemable than with Capote’s work. This book is an uplifting experience for the reader, bringing into focus the amazing glory of God and His ability to transform the vilest of sinners into children fit for eternal life with their Father in Heaven.

Horn and Howell, who interviewed and/or researched the convicted murderers David Berkowitz, Charles “Tex” Watson, Susan Atkins (Watson and Atkins were of the Manson family murders), and Sean Sellers (who killed his parents) present tremendously in-depth investigation of some of history’s most notorious killers. They powerfully present fascinating facts, well known and little known, about Jeffrey Dahmer (homosexual serial killer); mass, serial murderer Ted Bundy; and “The Pickaxe Killer” Karla Faye Tucker—all of whom accepted Christ before their deaths.

READ FOR THE FIRST TIME IN REDEEMED UNREDEEMABLE…

While in no way attempting to excuse or justify any of the devastating crimes these men and women have committed, the authors’ investigation brings to light not just seven case studies of hardened criminals, but seven accounts of loss. Seven stories of searching. Seven chronicles of change. And, ultimately, seven testimonies about redemption.

I wholeheartedly recommend that you get and read Redeemed Unredeemable: When America’s Most Notorious Criminals Came Face to Face with God—the untold stories of America’s most notorious killers, and the unspeakably difficult journeys that brought them to their knees.