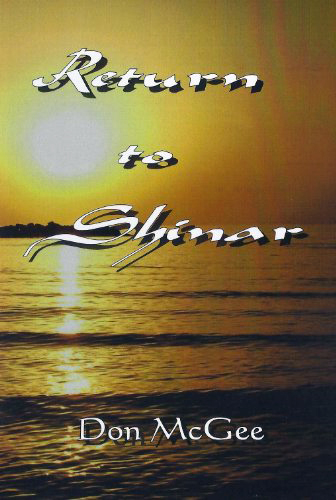 I begin by offering my apology to Don McGee, author of this booklet, Return to Shinar. At the same time, I must apologize to you who read this review. This is information I should have long ago presented to those interested in Truth about Bible prophecy.

Normally I don’t do reviews on booklet-length material. Book reviews are for books, not booklets.

This booklet, however, despite its brevity, is one that lays out what is prophetically scheduled for the near future, according to God’s Word, in such masterful, descriptive detail that it far exceeds ininformational indispensability most full-length books I have read on things to come.

Return to Shinar is a treatise on Lucifer’s ages-long methodology for enslaving God’s creation called man as it relates to our time right at this moment. Satan obviously senses the time is drawing near when he can grasp the reins of control. The author writes the following: “The mantra the world seems to be repeating is that the answer to the discrepancies is for all people everywhere to submit to a single governing authority and to socialism, which are key components to globalism. Though that solution is as senseless as it is destructive, it is exactly the system Satan will implement through his Antichrist after the rapture. He understands what all evil men have understood for centuries: In order to control and exploit people, they must be limited in liberty and taxed into poverty. The combination of totalitarianism and material depravation forces people to depend upon the government for everything, and such dependence is the bit in a horse’s mouth.”

McGee frames what is happening and why in such clear, powerful explanation as to almost dazzle in its brilliant simplicity. He begins by writing: “The reason things are happening politically and socially in America—and all over the world, for that matter—is that such a grand global aspiration requires an equally grand global plan.

Is all this just another “conspiracy theory”? No. This has nothing to do with the reputed efforts at a one-world government as commonly attributed to the Bilderbergers, the Council on Foreign Relations, etc. This has to do with two comprehensive and exhaustive plans, both of which are humanly inconceivable…”

The author then launches into an in-depth dissection of the on-going spiritual battle –put in a literal, moment-by-moment unfolding manner. His analyses impressed me so dramatically that they sparked in me the impetus I was searching for to begin writing my next book.
McGee certainly understands exactly what we see taking place, offering proof aftger proof that the governmental planners and would-be masters cannot hide what they are up to in these strange times. He presents analysis like the following.

“…People all over the world, even in America, will be willing to trade liberty for what they believe is security. Those same people will accept the cessation of liberty more easily if it is paralleled with ‘“social reform’ in which moral standards are relaxed, thus freeing them to soothe their loss with uninhibited self-indulgence.”

The author writes further: “Today it seems that the most comprehensive solution to every international problem is globalism, which has been referred to by some as something of a political dilemma. But, it is not simply a political dilemma, and its growing popularity is not an accident. It is actually a spiritual disease tailor made for what is coming to this planet and for the one who is behind it all.”

Don gets right down to the shoe-leather in addressing how swiftly the spiritual battle is assaulting basic structures in America and the world.

“Anyone who works regularly with high school and college kids and young married couples knows of their concern for their futures. They sit in Bible classes and listen to sermons in bewilderment because what they are seeing in the world and what they are being taught are two different things.
Typically, they’re being taught to interpret current events as being outside the parameters of the Bible; that the world has always been this way and always will; that it will all somehow work out OK just like it has always worked out OK. They are being told all kinds of things about where the world is headed, but are never encouraged to see what God has to say about the topic…”

He then gets really to the heart of the problem in this nation.

“…Their pastors’ message to them is pure secularism: Vote for the humanities candidate, support efforts to promote social justice, be tolerant of everyone, and extend moral equivalence to all religions and lifestyles, etc. Seldom are these young people told to pursue God’s standard for any endeavor.”

Please don’t neglect your education in these most important areas. This brief, concise booklet, as I mention above, has certainly provided the impelling thrust needed for a book I believe the Lord is prompting me to write. I don’t make such recommendations as this one lightly.