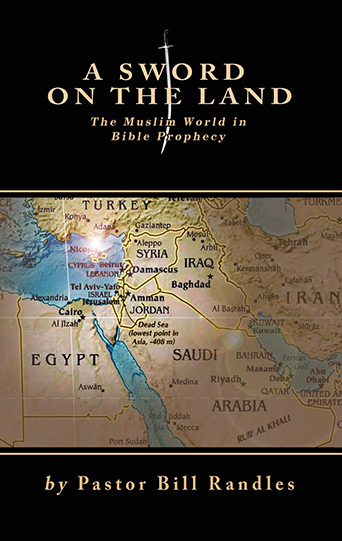 Bill Randles, a pastor, called to ask if I would have a look at his book, A Sword on the Land: The Muslim World in Bible Prophecy. My time spent with him on the phone certainly turned out to be something I believe was preordained.

I found while researching for my own book soon to be released,CAULDRON: Supernatural Implications of the Current Middle East, that information specifically encompassing the history—both historic and current—of the many peoples of the Middle East is hard to pin down and form into understandable presentation for the reader. Also, I found myself, while reading A Sword of the Lord, wishing that I had known about the book sooner. Having at my fingertips the author’s excellent organization of facts about the nations of Bible and modern times would have made my own efforts less laborious and the work go in a more time-efficient way.

One doesn’t have to be a scholar of Mideastern matters to comprehend this book. The explanations and descriptives the author has taken care to make clear to the reader are among this volume’s best attributes, in my opinion. Readers will actually find themselves delving into the intricacies of what is more often than not considered to be an enigma too involved to be explored.

I used to think that Hal Lindsey’s Late, Great, Planet Earth gave the best, quick-sketch description of the nations surrounding Israel. Bill Randles’ book surpasses that great work in this one particular area, in my view. You will get a true picture of what the world today faces, and why, with regard to the planet-rending potentialities within that caustic region.

The author says the following about his reasons for writing the book:

I wrote the book, “A Sword on the Land: The Muslim World in Bible Prophecy,” because I want to draw attention to the stunning modern relevance of the often read but little appreciated prophecies in Isaiah, Jeremiah, Ezekiel, Joel, Zechariah and the others, as well as the words of Jesus and the apostles concerning events in the last days.

Events such as the so called “Arab Spring” have been illustrating these prophecies right before our eyes, but unfortunately too few have been taught to interpret them. My goal is simplicity, and my method has been to take the place names in the Biblical prophecies, (Edom, Persia, Tyre and Sidon, and Babylon, etc.) translating them into their modern names, (Southern Jordan, Southern Lebanon, Iraq…etc).

When this is done, suddenly the prophets read like versions of today’s newspaper. Egypt’s civil war has been happening before our eyes (Isaiah 19), Syria’’ nightmare is beginning (Isaiah 17), the UN is “Casting lots for God’s people” just as Joel 3 predicted, Zechariah 12 is being set up right before our eyes.

There has never been a time like the one we live in and the events in the Middle East are a major aspect of the last days. The Arab Spring has a meaning, but not the one imputed to it by the talking heads and pundits, who treated it like a democratic breakthrough for the Middle East.

Arab leaders such as Hussein, Asad, Kaddafi, and Hosni Mubarek, were brutal by our western standards, but they were secular and not Islamic, other than for convenience. They served as corks, stopping up the pent up, frustrated rage engendered by radical Islam. God has been un-corking the bottles, and unleashing the Muslim world, for the final conflict of the nations prophesied in places such as Psalm 83, Numbers 22–24 and Zechariah 12.

I wrote this prayerfully hoping for Christians to wake up, and for sinners to realize why it is that they have this foreboding, and what to do about it, as well as for Muslims, people for whom Jesus died also, and who also can see that something is coming, and how to get ready for it.

I have no doubt that you will agree, upon reading A Sword on the Land,that Bill Randles accomplished what he set out to do. This is a book I can strongly recommend.