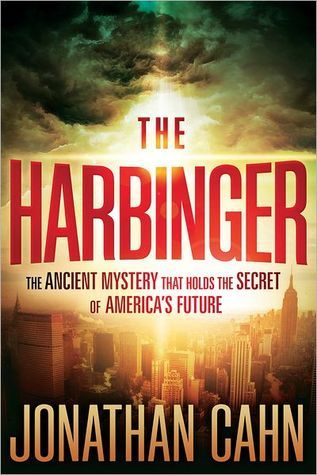 A phenomenon has taken place in the book publishing world. The secular book market–headed by the New York Times’ Best-Sellers list—has let slip through its normally anti-Christian critics’ hands a book of profound significance. It is on the surface a work of fiction that is at the same time deeply ingrained truth from the only source of truth there is–the very Word of God.Not since Hal Lindsey’s Late, Great Planet Earth and Tim LaHaye and Jerry Jenkins’ Left Behind series has such a volume been allowed to reach such a mass audience by those who control that level of mega sales in the book publishing industry. First time author Jonathan Cahn outlines the stunning fact about The Harbinger with the simple understatement from the opening page: “What you are about to read is presented in the form of a story, but what is contained within the story is real.”

I’ve been studying Bible prophecy for more than fifty years and have been writing about eschatological matters in terms of prophecy’s progression through our daily lives for most of forty. In all that time, I haven’t seen a case for current issues and events as having prophetic relevance presented in a more evidence-based way than in this book.

To my way of thinking, this book defies the art of fiction writing because the template would have it that there be action that builds to a crescendo, always keeping readers on the edge of their seats, wanting to get past the present life-and-death cliffhanger and onto the building suspense of the next. The Harbinger is all narrative through dialogue between three people, basically. It is, as the author says, a story, but one that is real. Unheard of! A Christ-centered story, with no real action–so massive in its appeal that it makes the big show–the NY Times Best-Seller list?

Certainly it is not formulaic. The Harbinger is inspired. There can be little doubt about it, after reading it. Most everyone who reads the story will agree, I’m convinced. That is the secret of its appeal. That is the power behind its defying the odds to crash right through the critique barrier that the secular guardians of contemporary literature constantly put up against scribes who would mention the name of Jesus Christ in ways other than as invective.

It is obvious: The Lord of Heaven wanted this book written and disseminated widely. There’s no agent or publisher who can see that that is done in a more proficient or powerful way. There is no critic or system of critiquing that can change such a course as He determines. The question becomes, then: Why is this book so important that the Lord has forced it past those anointed defenders of literature who rarely let such works get past them?

The Harbinger itself gives the answer.

The protagonist, Nouriel Kaplan, sits in a publisher’s office high above the streets of central Manhattan. He is there to propose a book idea based upon his strange experience. The woman executive, with a reputation for being straight to the point and known to rarely entertain a face-to-face meeting with a prospective author, impatiently asks what the book is about that could possibly be so mysterious.

Nouriel gives her the answer. “An ancient mystery…that holds the secret of America’s future…and on which its future hangs. And it’s not fiction—it’s real.”

The story then begins to unfold, as I’ve said, through an unconventional (for successful fiction) narrative–dialogue that basically involves only three characters. But, wow! What dialogue!

The Harbinger’s phenomenal success isn’t about the scintillating way the three converse with each other, however. The “wow” is in the subject matter discussed and the astonishing details unveiled as the story progresses. America’s past, present, and future are at the heart of the experience that Nouriel Kaplan–by way of ancient biblical seals mysteriously provided him–unveils throughout the book. His telling gets to the heart of what I and many other students of Bible prophecy sensed following the horrors of September 11, 2001. I wrote the following in the introduction to my book, Prophecy at Ground Zero, released in 2002:

Television screens across America and the world repeatedly flashed videotape of the huge passenger jet crashing full-throttle into the enormous building. Dazed people watched in awestruck disbelief while trapped victims leaped from the building’s top floors, some holding hands with others when they jumped. The massive twin towers disintegrated and crumbled to flaming rubble. It was the most heinous terrorist attack ever recorded. Almost immediately, angry, frightened people began demanding answers to the insanity now forever etched in their memories.

Many churches were filled the Sunday following the attacks in New York and Washington D.C. There was an instinctive sense that those murderous acts of terrorism were somehow foreordained. That the carnage now known as “Ground Zero” and the uncertain future is, in some troubling way, linked by prophetic destiny.

Prophecy At Ground Zero: From Today’s Middle East Madness to the Second Coming of Christ goes a long way toward shedding light on, and providing answers for, the dark, troubling questions that continue to arise from the decimation of September 11, 2001. You have, for many months, heard the pundits on network and cable news shows. They have analyzed the terrorism, the war on terrorism, and the Palestinian-Israeli conflict from every angle imaginable. Except from God’s angle. And that’s the only one that counts!

I’m writing this review to tell you that Jonathan Cahn has, with The Harbinger, been given the blueprint to what 9/11 was and is all about. He dots the I’s and crosses the T’s. He connects the dots through a mysterious prophet who interacts with his protagonist

Pardon me for mentioning another of my books, but in The American Apocalypse, I time and time again make the connection between the United States and Israel as preternaturally linked to each other in God’s great providence. Jonathan Cahn’s book makes clear that linkage like none other.

The Harbinger has its frightening aspects to be sure, but, once you’ve read it, you won’t be able to say you haven’t been given truth about the Israel/America connection and the defining prophetic event of our era, the falling of the towers on 9/11.

Please believe me. You must get and read this book. You will have no doubt, then, why it is a best seller!