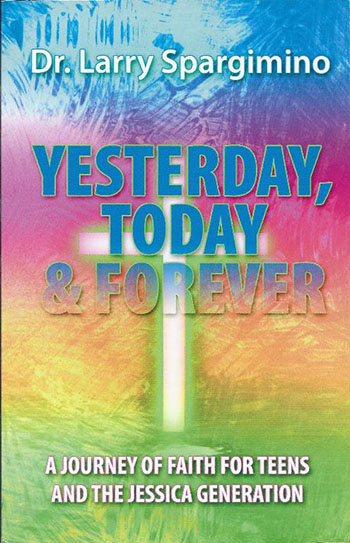 This is a book for which I wrote the foreword, so this will be a positive review, as you might expect. Beyond that, however, I give it an even moreglowing report, because I have had a chance to digest it another time since first reading this excellent work by one of the nation’s foremost scholars and broadcasters in Bible prophecy: Dr. Larry Spargimino of Southwest Radio Church Ministries.

My thoughts began, in constructing the foreword:

It is exceedingly rare that I find a book that brings the mind of God and the human mind together in such an almost-tangible way as this one. Its author purports it to be a volume aimed at “teens and the Jessica generation.” That descriptive makes me feel quite good, because the book connects with my own sixty-nine-year-old brain and spirit in all the right places. It will do the same for most everyone who reads it, I suspect.

That analysis of Dr. Spargimino’s excellent work, Today, Yesterday, and Forever, received reinforcement by my second reading. Although the teenage and young adult audience comprise his primary target with this volume, the author has hit a home run with this book for anyone who reads it, of any age, from teenager until–well—an old guy like me.

I also wrote the following for that foreword, which continues to be true:

[Dr. Spargimino] did write it specifically with young, maturing adults in mind. Certainly, this generation is where the future resides, and there could be no more noble an ambition than to touch young people with the message that God loves them and has plans for all who will follow His divine precepts for their lives.

In Yesterday, Today, and Forever, in addition to many other Holy Spirit-laden treasures of wisdom, the author writes the following:

The author lays down some tremendous faith principles for the young–and for the rest of us. Such wisdom marks this book as one that will help make straight the pathway of Proverbs 3:5–6, through practical advice and powerful, Spirit-filled suggestions on how to conduct life.

I’m especially awestruck with the powerful dynamism yet at the same time absolute clarity which Dr. Spargimino uses to touch —sometime in great depth—on everything from philosophy and government (the many isms that have ruled mankind) to history of the causes and effects of war-making by fallen mankind over the centuries. He takes apart and makes understandable the decades of developments from America’s founding to the present hour, during which challenges must be faced during every waking moment.

All of this he has done in one of the most cohesive treatments, written at a level that teenagers can understand, that I have read. To my thinking, it is a breakthrough in communication, one that should engender among the young—as well as among those of us not so young—a desire to develop our worldview from an increasingly godly perspective–all the while watching for Christ’s any-moment call to His church in the Rapture.

You will want to get this one to give to someone of the younger generation in your life. But, better get at least two copies, because I promise that you are not going to want to give up yours.