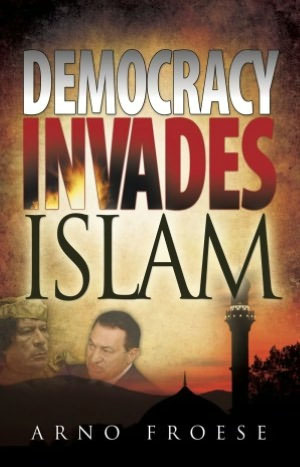 Arno Froese, head of Midnight Call Ministry, has always been right up there as one of my favorite writers, because everything he presents must be predicated upon what God’s Word has to say on the author’s topic of choice. He reminds me of the Apostle Paul just a little bit in that Paul let it be known when what he had to write was his own opinion. He tells us when he diverts from Divine Inspiration to inject his own thoughts. Even then, Paul made sure he had God’s Permission to include his own words.

The author’s writing, of course, isn’t Divinely Inspired, in the sense that the Bible is Divinely Inspired, but, I’ve always found his take on things to be covered by Holy Spirit Integrity and Influence, to say the least. I.e., his thoughts on the important subjects he examines speak directly to my own spiritual understanding. So, it was with considerable expectation to receive something profoundly worthwhile that I began reading Democracy Invades Islam, with thought toward writing this review. I was rewarded—my expectant hope satisfied.

Froese’s purpose for writing the book found its genesis in the pro-democracy uprising in the Arab world. From that has come such terms as “Arab spring,” a term that anyone who has had the slightest contact with news reports in recent months will recognize.

While the world’s understanding and reporting of what is going on with regard to troubles in the Middle East is explained quite succinctly in this volume, the author  recognizes and puts forward all of the matters involved in the uprising and in Islam’s threats from a profoundly illuminating Biblical perspective.

I experienced the light coming on in several areas of pursuit of understanding, while reading Froese’s unveiling of the layers of this great end times spiritual war taking place. The world sees there being some good in humanity; God’s Word says there is none good, no not one.

With this foundational Truth, the author cuts in laser-like precision to the core of what we as a generation face, and where unfolding issues and events are taking us.

He outlines in well-reasoned, scripturally-backed scholarship why humanistic solutions to the self-destructive course mankind has chosen will never work. He is not always exactly comforting in his rather pointed criticism of America’s complicity in moving earth’s inhabitants down the broad way to destruction. But, I found myself having to agree with him in almost every case presented.

Froese dissects the problem of Islam and the so-called democracy movement that is the nucleus of his premise.

How can Satan effectively oppose the Church and Israel? First, he must unify the world to create global peace. Second, He must present himself as the Savior of the world and the Messiah of Israel.

How is he to accomplish this feat? One word: deception. That is the real message of this book. In order for the devil to create peace on earth, goodwill toward men, and to guarantee prosperity to all people, he must bring all nations together. That means world unity is his first aim, politically, economically and religiously.

Here is where democracy comes in. The most respected, beloved and yearned for political system granting people to decide their own future is doubtless democracy.

While democracy has caused a relative peace and prosperity throughout the European world (West), the Arab nations have missed out. That is one of the major reasons for the Arab people to revolt against their governments and leaders. Although the Islamic nations are the possessors of the main sources of the world’s energy, the population at large is not benefiting from the oil wealth and is overwhelmingly poor.

Now, the time has come for the people to insist on change. In other words, the democracy invasion of the Arab world has begun.

However, the pages of this book show that behind this pro-democracy movement stands the prince of darkness, the god of this world. He is successfully working out the final details in his attempt to establish a one-world society where all people on earth can live together in peace and harmony…

This is a book you will want to read from cover to cover in one sitting, before starting over in a careful point by point dissection. Democracy Invades Islam has my highest recommendation.