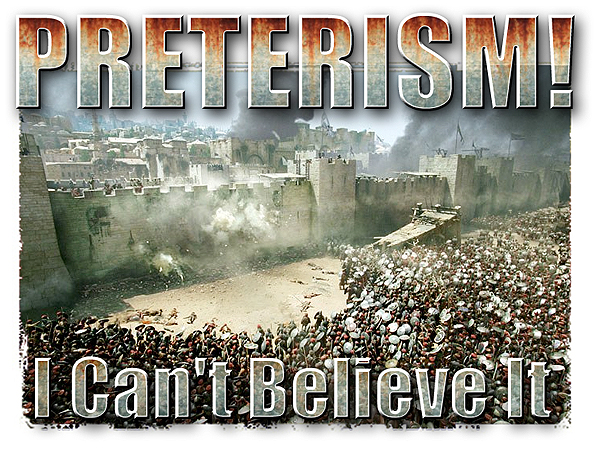 One of my key reasons for believing in the pre-tribulation rapture is the fact all other views are always trying to undermine pre-tribulationism. Up until now, the most vocal group of opponents has been the post-trib and pre-wrath folks. I’m amazed to find preterism now on the attack, gaining ground by mostly converting pre-tribbers.

What is preterism? This theory argues that all Bible prophecy has been fulfilled; it states that nothing remains on the prophetic calendar. According to preterism, events like the rise of the Antichrist, the tribulation, the rapture, and the Day of the Lord all took place around 70 AD, the year the Romans invaded Jerusalem and destroyed the second Temple.

I just cannot understand how anyone can follow a preterist line of thinking in light of current world events. As in many cases, pride is one of the most common reasons people begin following doctrinal error. They believe that they are part of a special group that has discovered a hidden truth. Never mind the fact that millions of people have joined them in supporting their folly.

Up until now, I’ve largely been ignoring preterism because it seemed equivalent to the Flat Earth Society. Well, I can’t stand by and watch error run free, so it looks like I’m going to have to add preterism to the list of erroneous rapture views that I need to actively refute.

The heart of this error is based on Jesus’ statement that “this generation shall not pass, till all things be fulfilled” (Mat 24:34). It seems easy enough to claim Jesus was speaking about a first-century generation; however, logic ends there when one contemplates the fulfillment of all Bible prophecy.

In order to make 70 AD the magic year, we would have to delete dozens of prophecies that were never fulfilled. When was the Gospel preached to all the nations? When was the Mark of the Beast implemented? What about China’s 200-million-man army? When did 100-pound hailstones fall from the sky? And what date was it when the Euphrates River dried up?

The questions are endless. Why did we have the rebirth of Israel? If Jerusalem was forever removed from being the burdensome stone, why has it now returned to that status? When did all the Jews shout, “Blessed is he who comes in the name of the Lord,” as Jesus said they would?

After being so strict in their interpretation of Matthew 24:34, preterists then run roughshod over many clear statements of Scripture. They say that although the “resurrection” happened in 70 AD, the bodies of Christians were left in the grave.

Preterists take the dangerous step of spiritualizing all passages of Scripture that relate to the nation of Israel, and claim that these refer to the church, the “New Israel.” They teach that the “old earth,” which Scripture says will pass away, is the Old Covenant. The new heaven and new earth, they say, is the New Covenant, and the “elements,” which Scripture says will burn with fervent heat when this happens, are the “elements of the law.”

Preterism produces some bizarre explanations for why the world is still experiencing suffering and calamity. One explanation I ran across cited God’s need for population control as the reason for mankind’s suffering. Here is what one preterist author wrote:

“I believe that people are born and people die. Kingdoms rise and kingdoms fall. God is the providential population controller. He brings famine, disease, natural catastrophes, wars and tumults. One-third of the population of Europe was destroyed by the Black Plague in the early part of this millennium. Eight hundred fifty thousand were killed in the 1556 earthquake in the Shanghai province of China. Two million were killed in World War II. Thirteen million were killed under Stalin and 6 million under Hitler. God is very equipped to control population.”