As you of our Rapture Ready family and friends are aware, Bible prophecy is rarely preached and/or taught today. This is indeed a tragedy—a travesty—because this generation has entered a time when God’s Word outlines as the very end of the Church Age or Age of Grace. Jesus Christ might shout at any moment “Come up here!” as given to the prophet John (Revelation 4:1).

We chronicle hour by hour—sometimes minute by minute—the incredible, stage-setting issues and events that point unmistakably to the imminent return of Christ for His church, all born-again believers.

Sadly, the people in the pews as well as in the world in general aren’t getting the message of what is about to happen. There is deafening silence from all but a very few churches and even fewer Pre-Tribulation-teaching Bible prophecy ministries.

The church must be shaken awake in these—the most troubling, although exciting—times in human history. The Lord is coming again!

For some time, I, like many of you who are our Rapture Ready family, have been impressed that God’s people must be awakened from the slumber into which the satanic forces of darkness have used so effectively to induce spiritual apathy. This apathy is especially apparent when it comes to God’s people not knowing or desiring to know about Bible prophecy and Christ’s return to put an end to the evil that’s developing all around us.

It is with this prompting that we believe a renewed effort should be made to reach believers with the message of what Bible prophecy is all about, from beginning to end—to show all who have Christ as their Savior and Lord that prophecy from God’s Word is all important to their lives, and to show that Bible prophecy is not gloom and doom, but joyful hope beyond all imagination.

And, this can be done by using “imagination”—but imagination deeply rooted in Bible truth about prophecy.

Most everyone loves great stories and storytelling. The Lord was the greatest of storytellers with His parables. Always, they were steeped in absolute truth. They were given for the betterment of the souls of men, women, and children in every case.

He told His parables often at the level of a child’s understanding. Jesus said to bring the children to Him, and when they did, He embraced them and no doubt told them marvelous things to light their spirits with great faith, hope, and love.

It is with this in mind that we have embarked on writing a series of stories for young people about the ultimate destination for those who live on planet earth this side of Heaven itself. We have given the series the title “Dream Doors.” This series will include stories about the Millennium or thousand-year reign of the Lord Jesus Christ upon earth.

But, they won’t be just for children. These will be stories to move the thoughts and hopes of all Christians ahead to what the Lord has prepared for those who love Him. Those things are beyond imagination, the Scripture tells us.

In this process of beginning the writing of these stories, I thought on who could best be at the heart of the writing in order to produce the absolute best possible stories to entertain in a spell-binding way, yet get the heart and mind of God into every page of every story.

A friend of many years just happened to be in our Rapture Ready family who is now the number-one writer of Christian fantasy on the planet—this is a verified fact, not fantasy. He is number one on Amazon!

Doug Hirt and I have known each other for probably seven or eight years, maybe longer. We have emailed back and forth on various prophetic topics as Doug has followed our articles, especially our “Nearing Midnight” columns.

Doug is a prolific author, with more than three dozen novels and many short stories to his credit. He has won professional literary awards for his books, and his latest series, “Cradleland Chronicles”—three novels of Christian fantasy about the time before the Flood of Noah’s day—is now number one in many major categories at amazon.com.

Here’s why the series is so important, in thinking on what we want to do in following the Lord’s prompting to shake the slumbering church as to the crucial hour of this generation.

In order to show the total prophetic picture as presented in God’s Word, we must go back to the very cradle of humanity—the times in Eden. We must show the progression of history and how prophecy—given by God to be understood—has been at the heart of the Creator’s plan to guide His creation called man. Prophecy is still in God’s holy plan, and can give direction and hope through these often terrifying times.

Doug Hirt’s “Cradleland Chronicles” series presents in fantasy form God’s prophetic blueprint. The novels take the reader—or listener—through the amazing adventures of the characters into the antediluvian world of the earliest times of human history. These stories, totally spellbinding in the very best sense of spiritual truth, therefore set the stage for our “Dream Doors” series that, when completed, will show God’s great prophetic plan from Genesis through Revelation.

Most who are reading this know that people in their fifties and beyond are almost exclusively the age group seriously considering Bible prophecy today. This must be changed. We as parents and grandparents—even as great grandparents, in some cases—must do something to change this situation, to get all ages into Bible prophecy study.

Getting Doug Hirt’s series into the hands of the younger people in our lives will be a positive step. We can begin to stimulate thinking that I believe the Lord will use to generate their interest in looking toward a brilliant future for themselves under God’s unfailing promises. 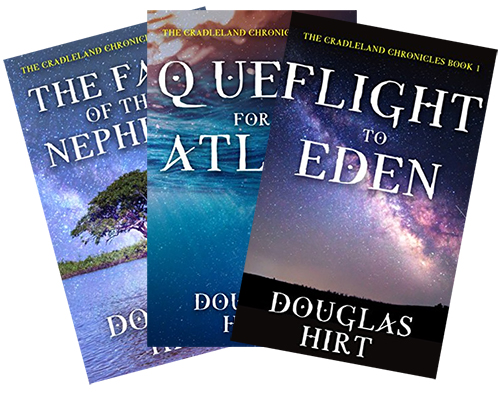 In my review of “Cradleland Chronicles,” I’ve included very brief excerpts of Doug Hirt’s series synopses to give a flavor of the exciting adventures that vividly and entertainingly present this number-one-ranked author’s portrayal of that pre-Flood civilization.

Keep in mind that this is a series that is currently gripping the imaginations of thousands of younger readers. The series, although fantasy, is deeply rooted in Bible truth and is designed to stir those readers to getting into the Bible itself to read God’s firsthand accounts.

The younger generation today loves the electronic book versions like Kindle and others. The costs are so minimal and the availability so immediate for these versions that their rock-bottom prices and instant accessibility have created a sensation among kids and adults alike.

I prayerfully hope you will consider seeing to it that those younger folks in your life get this series to begin that turnaround I believe we all know God wants for this generation.

This novel, the first of the “Cradleland Chronicles,” presents a dark power at work, intent on gaining complete control of the Cradleland—the birthplace of the still young world.

All that stands in the Power’s way is one troublesome line of humans; the descendants of Seth. They are of the only remaining clan clinging to an all-but-dead faith. And yet it’s from that faith that a prophecy threatens all plans of world dominion—a promise spoken from the heart of Eden warning of a human son yet to come who would strike back with a crushing blow.

The darkness is determined to stop that from happening. This redeemer must be born of a human, so an incredible scheme is launched to prevent the prophecy from coming to pass. First, pollute the human bloodline; and second…kill the only one who could be humanity’s deliverance.

In the second of the series, the reader steps back into the days of Eden, where giants dwell, dragons fly, and the battle between good and evil still rages on!

The future of Noah and the remnant of faith are uncertain at best. Atlan had fallen under the evil influence of Zorin, but the Gardener of Eden has other designs. He commissions Zorin’s brother, Rhone, to take back Atlan. There will be great obstacles to overcome—some that surpass human strength and understanding, and some that even reach beyond the forces of evil, threatening the very heart of human love and hope. Author Doug Hirt cuts through the mist of history and myth, creating a poignant tale of antediluvian culture, complete with biblical history, angels, and sheer literary magic!

The Fall of the Nephilim

In this final book of the “Cradleland Chronicles,” darkness has spread over the entire known world, and the scourge of the Nephilim has sunk deep into the very fabric of humanity. Only a small remnant of believers remains unpolluted by the Nephilim seed—but their numbers are dwindling.

The prince of this dark world knows the fulfillment of the prophecy is nearly upon him and the final element that stands in the way of his complete dominion is one person alone: Noah. But the prince has hatched a grand scheme to escape the prophesied doom. He has provided his people a technology that will allow his Nephilim children to break free of earth’s clutches…and escape its impending destruction. Noah also knows the time is nearly at hand—though seemingly insurmountable obstacles stand in his way.

Our Creator God has chronicled the story of mankind from this Genesis era through to the moment when He will remake the heavens and the earth. Doug’s fantastic treatment of the beginning of this mighty saga remains faithful to what the Grand Designer of all that exists has to say in His love letter to mankind.o:p>

Young and old alike will be riveted to each page and will have spiritual appetites ignited for getting into the Master’s unabridged version—the Bible—I have no doubt.