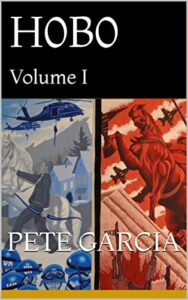 This story by my friend Pete Garcia is one that brings together in novel form much of the developments taking place in these end times. Those who have read Pete’s amazing articles over the years know the level of Bible prophecy discernment with which God has Blessed his writing. This is a story that I believe presents Holy Spirit enlightenment and will provide much needed understanding of these troubled times.

Major Tristan Zavota, a 46-year-old US Army officer on the verge of retirement, is now on his fourth deployment to Afghanistan to assist in the drawdown of US forces there. In Europe, an ambitious decision to launch a new digital currency triggers a series of calamitous events, which not only collapse the global economy and force a new world order to emerge, but leaves Tristan hopelessly stranded in hostile territory with no chance to escape. But God…

HOBO is a story of a man who, in the process of losing everything, finds God, redemption, and purpose in a world in freefall in the last days.

Pete Garcia is a seasoned writer, speaker, and teacher of Bible Prophecy and apologetics. He is a twenty-two-year Army veteran with numerous deployments to the Middle East, Europe, and Asia. He holds a Bachelor of Arts in International Relations, with a focus on Russian and Military History. Pete is also a ten-year veteran writer with Jack Kinsella’s Omega Letter, and now, his own site Rev310.net. Pete has contributed to three of Terry James’ books, Discerners, Lawless, and Trajectory.

You don’t want to miss this astonishing story by the author who has an insider’s understanding of and perspective on what’s going on in this troubled world—and what is on the verge of happening next!

To order HOBO: Volume I, go to the following.