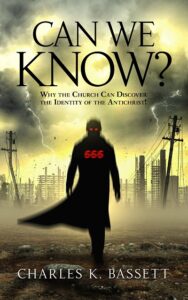 The field of Bible prophecy is girded by eschatological principles and theories that have stood the test of time. These principles are well known to expositors and are used by them to guide their analysis and conclusions. Expositors are therefore loathe to abandon these principles on a whim.

Yet, every so often, someone will proffer a new perspective on end-times prophecy and instantly change how people see things.

Author Charles K. Bassett is one such person. For years, the vast majority of eschatologists have held that no one can learn the identity of the Antichrist until after the Rapture. As you may recall, Paul the apostle said that the Antichrist would not be “revealed” until the “restrainer” was taken out of the way, meaning (according to most scholars) the Antichrist’s identity will remain under wraps until the Church is removed at the Rapture (2 Thessalonians 2:6-8).

But Charles Bassett now upends that axiom and explains why it is not only possible to discover the Antichrist’s identity, but why God actually wants us to make the attempt.

The name of Bassett’s book is Can We Know? In it, you’ll find some of the most compelling and easy-to-read analysis on the topic.

As many of you know, I am not a person who is easily swayed by “fad theories” on Bible prophecy. But in this case, I don’t believe that Bassett’s theory is a fad. Instead, I believe his argument is so well-founded and powerful that I’m now of the opinion that we can examine―from a scripturally permissive viewpoint―who the Antichrist might be right now.

This is not to say that the Church will definitely learn who the Antichrist is before the Rapture, only that the Bible allows such a possibility, and Bassett is careful to make that distinction.

In his book, Bassett identifies eighteen sections of Scripture that explain why:

To be perfectly frank, I had my doubts when I first saw the title of this work, but after reading it and considering the arguments presented by Bassett, I believe that Scripture does allow us to look for the Antichrist right now.

This is a call for serious research and sober discussion. It is not a call for wild speculation or sensationalism. But if Bassett is right and God wants us to know who the Antichrist is, then it is the duty of the Church to look deeper into the issue.

Can We Know? is definitely one of the most convincing essays I’ve seen in a while. It is packed with new information and solid analysis, and it’s easy to read. I think you’ll find it to be quite enjoyable. Two thumbs up!

Title: Can We Know? Why the Church Can Discover the Identity of the Antichrist!

Available in Paperback or eBook on Amazon.

Click the following link to purchase CAN WE KNOW?