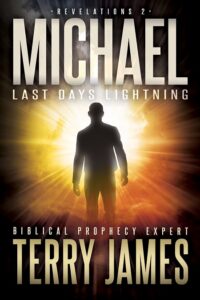 These are the end of days.

The prophet Daniel’s message from the throne room of God, delivered to today’s generation by a mighty angel named Michael, bursts with supernatural pyrotechnics to shatter the black, satanic veil of deception.

From the first novel, REVELATIONS, we meet again Tyce Greyson, a journalist who’s had strange visions ever since he was bitten by a serpent while on Patmos—the Aegean island where the prophet John received the visions he recorded in the biblical book of Revelation.

Greyson’s story picks up in MICHAEL with a car accident during a powerful rain storm. As his vehicle launches uncontrollably from the Maryland interstate, a gigantic, winged creature of lightning-like effulgence fills his windshield. He’s pulled from the wrecked car—astonishingly, without serious injury—and is shown a strange, golden sarcophagus being transported in the back of the tractor-trailer rig that caused the accident.

Later, Greyson learns that the golden burial chamber is part of an archeological project the Israeli government asks him to investigate and write about. In reality, he is expected to surreptitiously find out what malevolent globalists plan for the creature found within the sarcophagus. –Plans that are diabolical and involve evil world-wide, deep state machinations designed to enslave earth’s inhabitants.

Greyson, because of the unusual powers he possesses, is marked for clandestine use by American-Israeli and evil, otherworldly forces. He is visited from time to time and guided by a mysterious, heavenly being from the moment of the auto accident during the rainstorm until the end-times intrigue reaches its climax at the end of 2020.

The story is an intriguing convolution of supernatural vision and contemporary, geopolitical reality—with a mixture of occultic and advanced technological factors thrown in.

Here’s what some readers are saying about the book:

And here’s what the author says:

“With the stage-setting that’s taking place at a blistering pace, and Israel being the number-one signal of where this generation stands on God’s prophetic timeline, Michael’s divine assignment must now be about to begin.”

And at that time shall Michael stand up, the great prince which standeth for the children of thy people: and there shall be a time of trouble, such as never was since there was a nation even to that same time: and at that time thy people shall be delivered, every one that shall be found written in the book… But thou, O Daniel, shut up the words, and seal the book, even to the time of the end: many shall run to and fro, and knowledge shall be increased. (Daniel 12:1, 4)

That “book” has almost certainly now been opened.

To order MICHAEL: Last-Days Lightning, either in paperback or in Kindel, go to the following: