Terry James’ Brand-New Book: LAWLESS: The End-Times War Against the Spirit of Antichrist 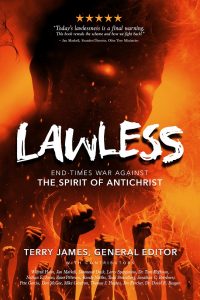 Peaceful protests with legitimate reasons behind them were viciously swept aside by violent anarchists. We have endured watching rebellion rise to the point of burning down cities, and even murder. There is now a fury to destroy every foundational principle upon which America was founded.

Thugs, in the name of racial inequality, they speciously proclaim,  destroyed statues—even of the Great Emancipator, Abraham Lincoln. It is rage that defies all reason.

Black neighborhoods in particular were in flames while anarchists destroyed their businesses and livelihoods. Looters robbed and pillaged at will, as the rioters and arsonists demand that police forces be dismantled.

The same political party that, in many cases, champions the insanity runs the very cities and states where the damage is most horrific. Their mayors and governors refuse federal help in putting down the insurrection—and that’s the only way to describe the evil being perpetrated by the lawless among us.

Today, chaos and turmoil inflame daily life within the fever of uncertainty. Geopolitical, cultural, and societal upheaval rip at the heart of America and the world.

Much of humanity is in a state of uncontrollable anger, while an infinitesimally small enemy—visible only under powerful microscopes—holds populations in its fear-paralyzing, pandemic grip.

LAWLESS: The End-Times War Against the Spirit of Antichrist is an intensely focused volume that answers questions about what’s really going on in these volatile, inexplicably strange times.

What does it all mean? Why such a divide? Why such anger and hatred? People want to know answers, and the answer is spiritual. It’s all there in Bible prophecy. The tumult altogether constitutes a major indicator of how near we are to the end of this age—the Age of Grace.

Deniers of man-made climate change that is purported to be destroying planet earth are accused of blaspheming the religion of Mother Earth worship. Such denial prevents the globalists-elite from bringing their long-prophesied changed world order to fruition.

But it is the lawless deniers of the God of Heaven within that globalist cabal who actually foment the chaos and rebellion that’s exploding across this troubled sphere. The spirit of Antichrist more and more rules in the hearts and minds of end-times mankind.

Seventeen writers, each steeped in spiritually attuned insights gleaned from God’s prophetic Word, expertly probe the issues and events of today—ones that almost without question point to the imminence of Christ’s return.

These broadcasters, writers, teachers, and pastors deal in depth with where this generation stands on God’s prophetic timeline.

You will again and again pour over the pages of this volume dedicated to providing Spirit-directed understanding of these troubling—although exciting—times. We say “exciting,” because all of this exploding lawlessness means almost certainly that the Lord Himself is about to step out on the clouds of glory and shout “Come up here!” (Revelation 4: 1).

To order  LAWLESS: The End Times War Against the Spirit of Antichrist at Defender Publishing and receive a large number of items–including books—absolutely FREE, go to the following.