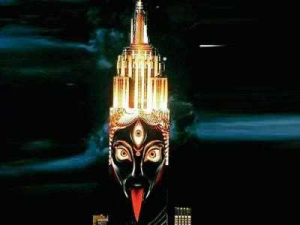 God will NOT be mocked!

The powers that be in NY glory in their unthinkable rulings on abortion. They celebrated when it was decided that babies could be murdered right up to the day of delivery.

Brethren, what do you think our God thinks of this? I believe that His anger is kindled, and He MUST judge America for allowing the murder of innocents.

In 2015, it was decided that the image of the Hindu Demon “Kali” would be projected on the Empire State Building in NYC. Little did the people of NYC know that just five years later, their iconic city would become a virtual ghost town.

Here is the original article I wrote about Kali:

Don’t forget, this was written in 2015 while we were in the grips of the demonic reign of Barack Obama.

It was certainly no random decision to light up the Empire State building with the face of Kali, a powerful and ruthless demon goddess of Hinduism. I will show the reader that the face of Kali just weeks after the heartbreaking videos of Planned Parenthood is a mockery by the devil in the faces of the people of America. And the timing was no coincidence.

“For we wrestle not against flesh and blood, but against principalities, against powers, against the rulers of the darkness of this world, against spiritual wickedness in high places” (Ephesians 6:12).

I know that we have read that passage of Scripture many times, but we need to understand that this is truth, just like everything else in the Word of God. It was important enough for God to place this in His Word as a warning to us. The blatant evil all around us is perpetuated by Satan and his demons.

Are people being used by the devil? Of course! Just as we are vessels for our God to use us to be Salt and Light in this dark world, those who follow Satan are accessible to him to carry out his evil plans. He knows his time is short. Haven’t you wondered why evil has become so commonplace now? When I was a child, no one would have believed the things happening today.

As Americans watched the alarming and heartbreaking videos of Planned Parenthood doctors laughing and discussing the body parts of aborted babies as line items, we were shocked and sickened. Many of us could not watch. It was just too much evil — unthinkable evil. Yet, this is what many Americans fight for and march for; and it seems that they would lay down their own lives to keep shedding the blood of innocent children.

It has gone beyond the woman’s right to choose. That is smoke and mirrors. It’s about murder and blood, and it is demonic to its core. They actually enjoy it. It is sport to them. For those of us who belong to the Lord, it is almost impossible for us to wrap our heads around this kind of evil. We are in times like those of the time of Noah.

“And GOD saw that the wickedness of man was great in the earth, and that every imagination of the thoughts of his heart was only evil continually” (Genesis 6:5).

I researched this demon goddess. All I knew was that her face was horrifying. But what I was about to find out was astounding. It made perfect sense that the evil one would mock us in this manner right after the images of the body parts of aborted babies had surfaced.

“Kali is the Goddess of Destruction and Dissolution in Hinduism, and she is one of the most popular goddesses in India. Kali is known for destroying ignorance, and she helps those who strive for knowledge of God. Her name means “The Black One,” and the city of Calcutta is named in her honor.

The Goddess Kali is fearsome in appearance. She has wild eyes, a protruding tongue, and she wields a bloody sword. Kali also holds the severed head of a demon, and she wears a belt of severed heads. According to one legend, Kali’s passion for blood incited her to once kill numerous Buddhist monks, so you will not see murtis of Kali enshrined on the same altar table with Buddha Statues.” – source

One must wonder why anyone would feel the need to display such a grotesque image on a landmark of NYC. Can you see how Satan glories in murder – especially of the innocents? The face of this demon Kali has a belt of severed heads. These are her trophies, much like Planned Parenthood sees the deceased bodies of aborted babies as their trophies.

Kermit Gosnell, an abortionist who is now serving a life sentence, kept the feet of aborted babies in jars. He had no reason to keep them except to look at them. How incredibly sick!

“Drunk on Raktabija’s blood, the Goddess Kali ran across the cosmos, killing anyone who dared cross her path. She adorned herself with the heads, limbs and entrails of her victims.” Does this not describe the pro-death camp and especially the abortionists?

“Their feet run to evil, and they make haste to shed innocent blood: their thoughts are thoughts of iniquity; wasting and destruction are in their paths. The way of peace they know not; and there is no judgment in their goings: they have made them crooked paths: whosoever goeth therein shall not know peace” (Isaiah 59:7-8).

This truth is profound and shows us that the devil has been at work to corrupt the earth and all who dwell in it since he was cast from heaven. He is a deceiver, a liar and father of lies, and the author of confusion. He draws those in who are looking for power. He promises them power and deceives them. It’s what he does and will continue to do until he is cast into the lake of fire, along with his fallen angels – the demons.

So now we understand that the image of the grotesque face of Kali projected on our Empire State Building is a message from Satan. I believe that he thinks he is winning. He is just that arrogant to think that he will be victorious over the Creator of the Universe – our Father in heaven.

Sadly, I believe that he has been victorious over America. His hatred for us transcends the hatred for all other countries except for Israel. Our Constitution is based upon Judeo-Christian principles and is filled with the name of God, and how we rely upon Him. Satan loathes this. And for many years, we supported Israel until we voted in this demon-possessed man who has all but destroyed this nation. His desire is to see Israel wiped off the map. He will never see this. God will not allow it.

“In whom the god of this world hath blinded the minds of them which believe not, lest the light of the glorious gospel of Christ, who is the image of God, should shine unto them. For we preach not ourselves, but Christ Jesus the Lord; and ourselves your servants for Jesus’ sake. For God, who commanded the light to shine out of darkness, hath shined in our hearts, to give the light of the knowledge of the glory of God in the face of Jesus Christ” (2 Corinthians 4:4-6).

PRAY for America, brethren. The body of Christ MUST wake up. We must share the Gospel of Christ with everyone we know- BOLDLY! We must be like John the Baptist crying out REPENT, REPENT!

It is sickening and unbelievable that many who call themselves “Christians” are still Pro-Choice. I just call this what it really is: PRO-DEATH.

REPENT of this evilness!! How do you think the Lord Jesus will greet you as you cry out to Him, “Lord, Lord?” Think about that.