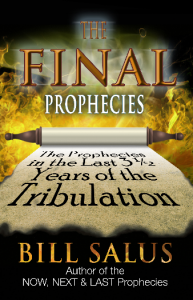 The FINAL Prophecies: The Prophecies in the Last 3 ½ Years of the Tribulation

It’s midway through the seven-year Tribulation period and the Jews have reinstated their ancient Mosaic law and are performing animal sacrifices in their rebuilt Third Temple.

Worldwide, an overflowing scourge of wars, pandemics, and famines plagues the planet.

Amidst the chaos, humanity cries out for help and a one-world religion empowered by supernatural signs and wonders emerges and responds.

Meanwhile, the Beast of the book of Revelation, known as the Antichrist, emerges out of the Revived Roman Empire to become the world’s #1 political superhero.

Then he divides the world into ten regions and appoints ten kings to set up a utopian society on earth.

When it looks like things are getting better, two prophets preaching on the streets of Jerusalem predict that the worst is yet to come.

The above storyline reads like another Orson Welles War of the Worlds script, but it’s not! It’s the opening lines of the latest Bill Salus book trailer.

Unbeknownst to Tom Horn and myself, while we were co-authoring our latest book, entitled Antichrist and the Final Solution, on the other side of the country, my dear friend Bill Salus was at it again writing another book.

What’s fascinating is that our two books cover many of the same Tribulation period topics. What’s even more interesting is that when our respective books are read side by side, it’s like watching the same movie, but from two different camera angles.

Seldom before have two books that were released about the same subject ever complemented each other so well. The different perspectives provide a richer reading experience and a greater awareness of what happens during the dreaded Tribulation period.

The latest Bill Salus project is entitled, The FINAL Prophecies: The Prophecies in the Last 3 ½ Years of the Tribulation!

It’s book 4 of an end-times nonfiction series that chronologically orders the unfulfilled prophecies between NOW and the SECOND COMING of JESUS CHRIST.

The other books in the series are The NOW Prophecies, The NEXT Prophecies, and The LAST Prophecies. All of these books are written in a manner that translates complex and sometimes cryptic prophetic information into a simplified, understandable fashion.

The FINAL Prophecies includes helpful timeline images that guide the readers through the plethora of Bible prophecies that happen at the midpoint and last three and a half years of the Tribulation period.

It devotes three entire chapters to explaining what the mark of the Beast is. One of these chapters explains how rapidly advancing cryptocurrencies, blockchain technologies, and a global digital ID can easily be incorporated into the coming global, cashless society of the Antichrist.

In addition to the technological aspects of the mark of the Beast, Bill delves into the potential supernatural components that may also be involved, such as the possibilities that the mark may offer a disease-free, longer life with superpowers like superhuman strength and psychic powers.

Upon reading Bill’s latest book, you will be amazed to learn about the ancient biblical predictions that are reserved for fulfillment in the FINAL–and worst–three and a half years on this present earth’s timeline.

This new book reveals how the greatest story ever foretold ends. It explains how you can make a difference in these end times. And it warns, “Don’t get left behind to face The FINAL Prophecies.”

The FINAL Prophecies, The Prophecies in the Last 3 ½ Years of the Tribulation

Watch the book trailer at the following.

You can purchase The FINAL Prophecies book and DVD at www.prophecydepot.com.