Satan’s Hatred of our President; It Has So Many People Deranged

Yesterday, I was on Twitter throughout the day. I was following what was trending on that social media platform. Of course, it was our president and him having been tested positive with Covid-19.

However, another topic was being discussed and that was Sleepy Joe’s comment at the debate that ANTIFA was an ‘idea’ and not an organization.

I tweeted what I knew to be true about ANTIFA – and that this is INDEED an organization of Anarchists and Marxists. It seemed as if an army swiftly coalesced and attacked me for my tweet. I was called all manner of disparaging names with a few threats thrown in as well.

I began to look at the people who were attacking me and saw on their profiles that they were affiliated with ANTIFA. I defended my stand on ANTIFA but soon realized that I could not keep up with the vile attacks. At that point, I decided that blocking the worst of the offenders was my only option. It took me almost an hour, but it was worth the time.

Back to our President

Dr. David Samadi happens to be a friend of mine. He has a huge following on Twitter. You may remember him years ago on Fox News. He appeared with Dr. Segal on ‘Sunday House Call.’ He is now the medical consultant on Newsmax and appears regularly.

Dr. Samadi is a Conservative and supporter of President Trump. Yesterday, he made a video in which he talked about Trump and how he would pull through. Dr. Samadi is a strong believer in the ‘cocktail’ of HCQ, Z-pak and Zinc as the first line defense in early Covid.

Here is the video which Dr. Samadi put on Twitter:

Twitter banned Dr. Samadi for 7 days because of his video.

But I will show you what Twitter DID allow.

It is absolutely disgusting.

I saved these “tweets” as screenshots: 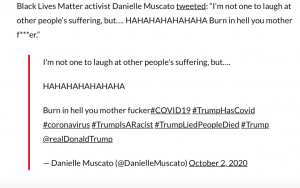 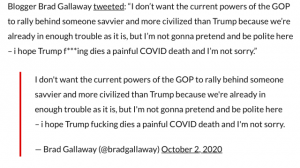 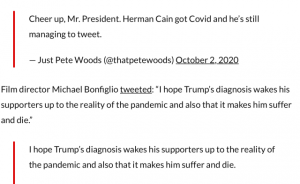 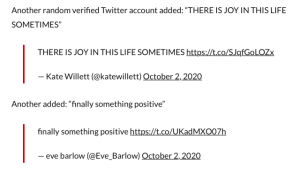 Brethren, there were many more hate-filled tweets from Derangement Syndrome sufferers, but I think that you get the picture of what transpired on Twitter after our president’s positive Covid-19 test was divulged to the public.

This is just a glimpse at the insanity which I tend to believe is demonic. I don’t remember people being this hate-filled and lacking any semblance of compassion.

But God’s Word tells us all about this:

“For men shall be lovers of their own selves, covetous, boasters, proud, blasphemers, disobedient to parents, unthankful, unholy, Without natural affection, trucebreakers, false accusers, incontinent, fierce, despisers of those that are good,

“Traitors, heady, highminded, lovers of pleasures more than lovers of God; Having a form of godliness, but denying the power thereof: from such turn away. For of this sort are they which creep into houses, and lead captive silly women laden with sins, led away with divers lusts,

“Ever learning, and never able to come to the knowledge of the truth. Now as Jannes and Jambres withstood Moses, so do these also resist the truth: men of corrupt minds, reprobate concerning the faith. But they shall proceed no further: for their folly shall be manifest unto all men, as their’s also was” (2 Timothy 3:2-9).

As we watch the horror of this world play out in front of us like a scary movie, as children of God we must pray.

Right now, most of my prayers are for President Donald Trump, the First Lady and Hope Hicks for speedy recoveries.