The daughter of Tavy and Willie Powers, Rachel was the seventh of ten children, three of whom became Baptist pastors like their father, Tavy, a pastor and a farmer.

Rachel, valedictorian of her high school graduation class, earned a scholarship to Union University in Jackson, Tennessee, where she studied to be a registered nurse.

She loved Jesus and was an outstanding wife, mother, church member, and more. All who knew her recognized her as one of the most selfless, beautiful, honest, compassionate human beings to ever grace this planet. She took an interest in all people, caring for them and loving everyone she encountered unconditionally.

Rachel was the ideal pastor’s wife to Daymond, who served in ministry until he retired in 2006. She urged her husband to write his first book, she served and taught in the churches he pastored, went with him everywhere he went, and took two grandchildren with her to church every Sunday. It was like Daymond and Rachel were joined at the hip. (If you saw Daymond, you were sure to see Rachel as well.)

An avid Bible student, Rachel studied her Bible constantly, with her number-one priority in life being to learn as much as she could from the Lord and to serve Him both in her church and community.

At church, she taught Sunday school for most of her life; led numerous Bible studies; worked with children on Bible drills; served in the nursery; was involved with the women’s mission group; regularly participated in visitation and outreach; and met with other women at church almost every week to pray for her pastor and others.

In her community, Rachel volunteered to answer phones and pray with those who called into a TV station, where she got Daymond involved in a program called Ask the Pastor. She also for many years led Bible studies for a group of folks who gathered at a local restaurant.

Rachel loved to go on mission trips and joined as many as she could, despite the fact that she had knee and hip replacements. Other church members sometimes pushed her in a wheelchair, etc., but Rachel was determined to go and minister for long hours even though she was not well. On two different occasions, Rachel had to be hospitalized when she returned from a mission trip.

On the inside cover of her Bible were Rachel’s handwritten words: “Make yourself irreplaceable.” That is exactly what she did. At her funeral, her pastor said, “It will take three or four people to replace Rachel at church.”

It is difficult to understand why God took Rachel with this world being in the mess it’s in, but Daymond believes with all his heart that he will see Rachel in the Rapture very soon. 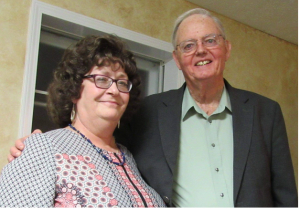 By God’s grace, Daymond Duck is a graduate of the Univ. of TN in Knoxville, TN, the founder and president of Prophecy Plus Ministries, the best-selling author of a shelf full of books (three have been published in foreign languages), a member of the prestigious Pre-Trib Study Group, a conference speaker, and a writer for raptureready.com. He is a retired United Methodist pastor, has made more than 300 TV appearances and has been a member of the Baptist Church in his home town since 2006.

Daymond Duck is an internationally recognized authority on End Times Prophecy and the Pre-Tribulation Rapture.