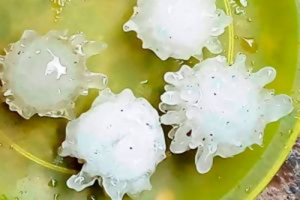 I believe that the Corona Virus shaped hail is NOT coincidental.

Recently, I read that China leader Xi Jinping has threatened elderly Christians to stop worshiping their God or else the government will cut off all aid to them. **This story at the end of this article.

If there was ever a truly demonic government – it is China.

Coronavirus-Shaped Hailstones “the Size of Eggs” Fall in China: An End-of Days Omen?

The Beijing Meteorological Observatory issued a yellow warning signal for thunder and lightning early on June 25th, but residents were shocked when the warning went on to include a rare summer hailstorm. The hailstones were not particularly large, averaging about the size of ping pong balls, though this was sufficient to cause considerable damage, affecting more than 30,000 people and destroying 1,200 acres of crops.

Perhaps the most shocking aspect of the hailstorm were the photos on social media showing oddly shaped hailstones powerfully reminiscent of the spiked shape of the coronavirus.

Despite the unseasonal aspect of the storm, it was strangely fitting that the hail interrupted the Dragon Boat Festival traditionally held around the time of the summer solstice. The festival is held on the 5th day of the 5th month of the traditional Chinese lunisolar calendar, which is the source of the festival’s alternative name, the Double Fifth Festival. The fifth lunar month is considered an unlucky month, and the fifth day is a bad day of every month. According to Chinese tradition, natural disasters and illnesses are common in the fifth month.  source

China’s communist government is warning elderly Christians that they will lose basic benefits if they don’t stop practicing their faith.

Bitter Winter, the online magazine about religious liberty and human rights in China, reports the Communist Party is threatening “to take away the last means of survival from elderly believers,” the government benefits of “housing, food, clothing, medical care, and funeral expenses.”

“A Catholic from Fuzhou city in the southeastern province of Jiangxi has been receiving monthly 250 RMB (about $35) from the government since 2018, the year her husband died,” Bitter Winter reported.

“At the end of 2019, local government officials threatened the woman, in her 60s, that the subsidy would be withdrawn unless she removes images of Jesus from her home. ‘Because the Communist Party feeds you,’ they told the woman, ‘you must only believe in it, not God.’ Two months later, the pension was canceled because she refused to remove the symbols,” the report said. source

Brethren, do we even have to question why this tyrannical atheistic Communist giant has been plagued by hail resembling the Covid-19 Virus? Scientists across the globe have agreed that the virus was manipulated in a Wuhan Virology lab and then released upon the world.

Our God is sometimes not too subtle with his judgments!