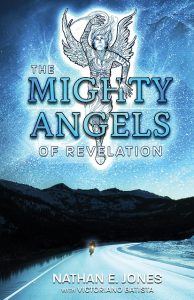 The Mighty Angels of Revelation

Nathan Jones, my good friend and colleague who serves with Dr. David Reagan’s Lamb and Lion Ministries and is the co-host of the Christ in Prophecy television program, has written what I consider to be the premiere book on Angels. If you don’t have this book nearby to grab and study then you will miss the full scope of what God’s Word has to say about these magnificent creatures.

The information contained therein is stunning in its breadth of exploration and examination. It is, as I have written, the very best, most comprehensive book on the subject that I’ve read.

Nathan asked that I read the book manuscript and consider writing its foreword. His invitation turned out to be not a chore because of work disruption, but a genuine blessing that has edified my study and expanded my biblical vista in ways I’m still discovering.

My foreword begins with the following:

Nathan tells of what his family is certain was direct, heavenly intervention by one of God’s messengers. I once would have been somewhat reluctant to believe in such intervention—at least not on a regular basis. However, on April 22, 2011, I faced an angelic cloud of witnesses on three different occasions when my heart stopped three separate times and I was declared clinically dead on arrival by a hospital physician.

That there are angels among us—or perhaps better stated, we are among them—I have absolutely no doubt in the deepest reaches of my spiritual heart since that widow-maker heart attack on that Good Friday of 2011.

But it is not that strangely glorious experience that convinces me now; it is the very Word of God. In that regard, Nathan Jones’ new book focuses intensive enlightenment upon the story of angels found in the Bible.

A devastating car wreck almost killed Nathan’s parents. If not for a lone biker who had stopped at the scene of the accident and administered first aid, some say they would have died before medical help arrived. The only problem: only one person could recollect the biker ever having been there. Their rescuer had mysteriously disappeared without a trace. The only survivor who could remember insisted they must have been rescued not by a mere man, but by an actual angel sent from God.

This jolting event in the life of one family led author Nathan Jones to set off to explore his own skepticism about the possibility that angels were not only real and active in the Bible in the past, but continue to be real and active in our world today. He pondered: Are angels still secretly working among us, serving God as His angelic messengers? Are angels actively involved in directing the affairs of mankind? How do Satan and the demons play into the spiritual warfare raging behind the scenes? And, does God plan to use His mighty angels to reshape the world that is yet to come?

In his pursuit of these questions, Nathan was challenged by a pastor friend, Vic Batista, to seek out one of the greatest sources in the study of angelology–the book of Revelation. With its whopping seventy-two instances of angels, demons, and entire groups of angels and demons, Revelation stands apart from all of the other books in the Bible as the most prolific source for learning about angels.

Revelation contains great insights into the end-times days in which we are living, as well as describes in stunning detail the horrors in which the earth will soon be plunging headlong. Out of this dark tale shines a ray of light, as Revelation’s main purpose is to provide that blessed hope that Christians so desperately need—Jesus Christ is returning soon.

Just a quick perusal of the deeply detailed table of contents to Nathan’s book will give you understanding that this volume is the ultimate work on bringing to light truth about these marvelous beings.

This is a must-have reference book, as well as a thrilling and inspiring read. I can’t recommend it highly enough!

Title: The Mighty Angels of Revelation