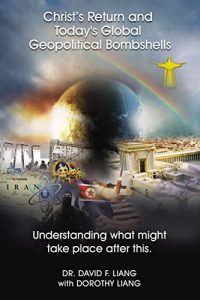 Dr. David F Liang is as much the reason for this review as is his book itself. His credentials are impressive, in that he has moved among the elite within geopolitics and diplomatic intrigues for many years. His take on international affairs is especially relevant for my purpose in reviewing his work.

The relevance comes from the fact that he is a born-again believer who strongly supports the pre-Trib view of Bible prophecy yet future.

Dr. Liang’s biography perhaps shows why my interest in writing the review was piqued.

Dr. Liang was the Head and Thrust Leader of Space Systems and Technology within the Canadian Department of National Defense (DND). He was responsible for all space-related research and development activities including surveillance of space, surveillance from space, satellite communications, ballistic-missile defense and nuclear-related R&D.

When the 911 attack took place, Dr. Liang was meeting with senior leaders of the CIA and National Reconnaissance Organization (NRO) in Ottawa, Canada. He was at NRO HQ in Washington, D.C., the day President Bush was briefed by the then-Director of CIA that Vladimir Putin had just come to power in Russia.

In 1988, Dr. Liang, with what some might say was prescience, wrote in Chinese Christian Mission Magazine about the possibility of Eastern Germany uniting with Western Germany; and Chinese intellectuals having conflict with the Chinese military.

In 1991, he received a Department of National Defense commendation for his R&D contributions. In 1996, he received a Certificate of Award presented by NATO Advisory Group for Aerospace Research and Development.

Considering his impressive resume, Dr. Liang is in position to present in this book a unique and fascinating perspective on things to come. He has indeed done so. His strong adherence to Biblical scripture is something rarely coming from those immersed in the stratospherics of international dealings. Certainly, such attention to Bible prophecy from the pre-Trib view is, I would say, without precedence.

Christ’s Return and Today’s Global Geopolitical Bombshells: Understanding What Might Take Place After This will, I think, keep the reader’s attention riveted to page after page. It did me.

Many people are eager to embrace Nostradamus and other secular prophets revered by the world’s curiosity seekers. All the while, they dismiss the Holy Bible’s prophecies. Yet the Bible (in Revelation chapter 4) promises: “Come up here, and I will show you what must take place after this.”

Inspired by that promise, the author has gleaned decades of insight regarding global geopolitical events and what might take place toward the end of this world as we know it.

This is a volume I can recommend to the student of Bible prophecy without reservation.

Christ’s Return and Today’s Global Geopolitical Bombshells: Understanding What Might Take Place After This

For bulk purchase, Bulkbook can discount up to 55%.]