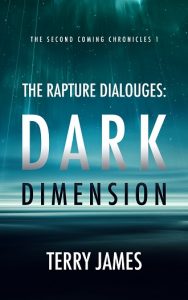 The Rapture Dialogues by Terry James

Terry James has cut new pathways through the troubling UFO mysteries with his novel, “The Rapture Dialogues”.

“The Rapture Dialogues” is a story that explodes the mythology wrapped up in UFO/sightings phenomena, with a unique view toward supernatural beings interjecting themselves into today’s world. The novel’s depiction from the discovery of the Dead Sea Scrolls, and the 1947 Roswell incident, to the 1967 “Six Day War,” propels the reader swiftly forward to the present day, and prepares the stage for biblically prophesied events.

The novel’s subtitle, “Dark Dimension,” encapsulates the ominous supernatural portent that insinuates itself into the lives of the characters who dynamically traverse the story’s 384 pages.

The Rapture Dialogues rages frighteningly toward what prophets present as an electrifying future for Planet Earth.

Tim LaHaye, co-author of the 65 million selling series “Left Behind, wrote upon the book’s original release: ”  about Terry James and this powerful work of fact-filled  fiction:

“With a solid background in Bible prophecy, my good friend and colleague author Terry James has penned a highly suspenseful and thought-provoking novel entitled The Rapture Dialogues. This fascinating work, which begins with the discovery of the Dead Sea Scrolls, weaves together an incredible tale involving mysterious UFO sightings, secret government cover-ups, international warfare, and frightening encounters with extra-dimensional beings. The Rapture Dialogues chronicles these seemingly unrelated and fantastic events as they collectively set the stage for the biblically prophesied Rapture of the Church and the rise of Anti-Christ. Intriguing, unique, and entertaining.”

“Terry James has written a viscerally exciting and thrilling end times shocker that will knock your socks off. Stable prose and excellent story telling provide dynamic twists and reversals that keep you on the edge of your seat from the first chapter to the fantastic conclusion.”

The late Chuck Missler, a well known lecturer, a foremost authority in Bible prophecy, and then president of Koinonia Institute said upon the novel’s original release:

Terry James’ newest book, The Rapture Dialogues, is an engrossing contemporary thriller. Although the characters might be fictional, the spiritual warfare that is behind today’s current events is all too real—a riveting read for nonbelievers as well as Christians. The book ends with a great cliffhanger—I can’t wait for the sequel!”