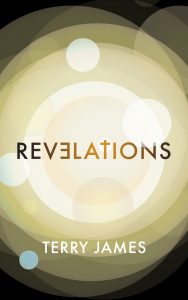 REVELATIONS, Terry James’ new novel, has gotten off to a good start. We thank you for making it one of the top new releases in fiction in Kindle! We hope you will recommend the story to many of your friends. This will help greatly with the book’s momentum while we strive to get out the prophetic Word in fashion that fiction readers will pick up and read.

Although fiction, it represents Truth from God’s Word and can be most effective in disseminating information about things to come.

Also, we ask that you write reviews on Amazon.com The greater the number of positive reviews, the more widely spread will be the prophetic  Message that Jesus is coming again –perhaps very soon!

Now available! Get your copy today!

“I’m not sure the rest of us would agree with you,'” Tyce said, glancing toward Marial, who conversed with the others.

“What do you think, Tyce? Do you sense this…vanishing…will actually happen?”

Greyson paused to reflect on the network executive’s query.

“All I can say is that this one had a completely different feel…That is, it was more…eerie, I guess. It was more surreal than the others. More ethereal.”

“It has already gone wild on social media. Everyone in media and the government are after me to let them at you.”

“No. Don’t worry. let’s just get on with filming the documentary. The suspense and intrigue will build. This was the best thing that could happen for the promotion of the series,” Bressnick said.

Greyson spoke in a somber tone after a few moments of silence.  “If what I saw during this…if it actually happens…I’m not sure the documentary series, or anything else will matter too much.”

Marial looked out the helicopter’s window, seeing the Aegean sprawl 14,000 feet below. Spiney ridges of the small Cyclades chain protruded from the cobalt blueness like the humps of a gigantic sea serpent.

“Patmos is that larger one, there,” Tyce said loud enough to be heard over the thumping of the helicopter. He leaned near her to point to a large mass of gray jutting from the Aegean.

Marial looked out the window then at him.” Are you nervous, going back to where this all started?”

“Only thing I’m nervous about is that episode last night. I don’t know what it means…”

“The last one of the…episodes…didn’t happen. The bomb  exploding off North Carolina’s coast. Maybe this one won’t come to pass.”

“But, the vision seemed to clarify why the bomb didn’t go off. The word Spared ,  that appeared after the scene of the people in prayer…The voice saying that their prayers were the reason…”

“Well, the people were praying in the vision  last night, weren’t they” she said, leaning against his arm and laying her face against his shoulder.

Her warmth somehow calmed his uncertainty about the prediction –about the trip to the strange cavern where it all began.

Stravos’ broadly beaming smile greeted them when the huge blades stopped turning and they walked down the steps from the helicopter’s doorway.

The small Greek waved to get Greyson’s attention.

Stravos grabbed the journalist’s hand and shook it vigorously with both hands.

“You have a good flight, yes?”

“Any flight in which you get back down safely is a good one,” Tyce said, returning the Greek’s smile.

Stravos smile widened even more, his attention turning to the woman at Greyson’s side when he was introduced to her.

“This is Marial Gunn,” he said while Marial put out her hand to take that of Stravos. “She will be working on the documentary with us.”

“She your woman?” Stravos said, continuing to smile and hold her hand.

“No,” Marial sighed in feigned disappointment. “Just his associate.”

“The truck is here, as you see,” Stravos said, waving his hand at the big vehicle behind him. “This will carry all of your equipment. And, I have men who will move it up the mountain. They will work very cheap.”

Greyson put his arm around Stravos’ shoulders. “I worked it out so you and your men will be well paid for helping in everything we do while on Patmos. I’ll tell you all about it a little later.”

The Greek said nothing, but smiled while looking down while they walked and nodding his head, obviously pleased at what he heard.

“Have you been  up to the cave yet?” Tyce said while they rode in Stravos’ van that moved along the rough road ahead of the truck.

“Yes. We have made certain the serpents are not there,” the Greek said, matter-of-factly.

“Yes, that is good,” Marial said  with enthusiastic agreement.

Their amusement seemed lost on Stravos, who took it as compliment while concentrating on the road ahead…

Tyce sat on the stone of the flat stone below the larger slab of natural formation. He looked out the cave opening, down the mountainside to the long, gray-brown beach. The Aegean lay beyond for as far as could be visually determined.

He alternately, between times of looking at the Mediterranean vista, read the script held in his hands.

He would have to memorize only a small portion –for moments during the filming when the cameras were on him. The rest he would read as narrative to be the voice over for the many intriguing shots the film crews hoped to capture.

But, he reminded himself, he must always read the voice over  portions with the same, conversational cadence and tone as when on camera.

“We’re about ready to do a test or two,” one of the crew said from near the small entrance to the upper cave room.

“I’m about ready, too,” Greyson responded, looking in the direction of the man. His eyes went automatically to the ledge above the cave opening. The ledge where the snake had latched onto his hand.

He shivered inwardly. It was a ledge that had been in his nightmares since…

Marial’s face appeared in the opening. There was anxiety in her voice.

“What?…What’s happened,” he said, hurrying to duck, then follow her through the opening when she retreated.

“It’s Bressnick,” she said, handing him the satellite phone.

Get your copy of REVELATIONS by Terry James today!