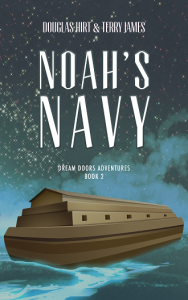 The second book of the Dream Doors Adventures series—Noah’s Navy—by Terry James and Douglas Hirt has been released!

We remind you grandparents, in particular, that this is a series of exciting stories for your grandchildren.

The setting is the Millennium–that 1,000-year reign of King Jesus upon planet earth.

The stories are fantasy adventures enjoyed by children living in the Millennial age. But your grandchildren will be swept along in the excitement and joy right along with that future generation that will be thrilled by everything the Lord has planned for those who love Him.

The Millennial Kingdom is a wondrous time and place to be born. The world is at peace and has become like the Garden of Eden: beautiful, exciting, and ruled by the Great King Himself, who sits on His throne in the golden street city of Glorania.

In such a perfect place, who would expect thieves to prowl at night?

This time, the troublemakers intend to steal a special gift entrusted to Adam Beam by the Great King. Luckily, Adam is startled awake during the burglary. Lester and Castor panic and escape through a carelessly drawn Dream Door, accidentally landing on Noah’s Ark at the time of the Great Flood. It doesn’t take Adam long to figure out where the thieves have gone. At once Adam, his sister Zonia, and their pet Siberian tiger Toby are in hot pursuit to recover the stolen treasure, only to learn that the gift has fallen into the raging flood waters and is permanently lost.

Adam has an idea about how to find the precious gift, but it will take some clever Dream Doodling, the help of Noah and his family, a navy of friendly sea creatures, and…a submarine Dream Doodled from the far future. Naturally, the evil Evols intend do all within their power to stop Adam from completing his mission.

Doug has grandchildren and I have “honorary” grandchildren (although they are a bit older at this stage of my life). We are living these stories ourselves through what we perceive as spiritually attuned senses that create imaginary adventures. We want each Dream Doors adventure to influence youngsters–yours and ours–in God’s most wonderful ways.