Learning from the Bible Bad Guys 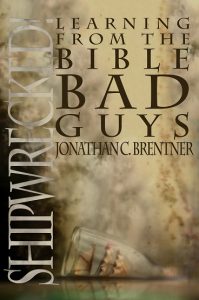 Have you ever thought, If I could just do that over again? Or thought, Wish I had made a different decision way back then…

I have done so many times over my many decades of life. It’s a common human trait to lament some of the mistakes we’ve made. But, of course, wishing makes no difference. It changes nothing. If is for children, as the lyrics to Roger Whittaker’s song goes.

To avoid having to constantly look back at our lives and say, “If only…” the avoidance must be accomplished through preventative action. We must prepare in some fashion so that we make wise decisions as they come in order to avoid looking back and having to say “If only…”.

Jonathan Brentner has given us a book that offers such wisdom—how to avoid the pitfalls of life that cause us to look back and have to say “If only…”.

The author has pulled the points of wisdom from the greatest of all works authored by the Greatest of all Authors. I’m referring, of course, to the Holy Bible, dictated to human writers by the Lord, Himself. One simply cannot go wrong under such direction.

Thus, Jonathan’s is a book that I can wholeheartedly recommend.

But I also think it is one of the truly unique concepts I’ve come across for helping us avoid the pitfalls of life as described above.

Shipwrecked!: Learning from the Bible Bad Guys is a title perfectly describing that unique concept. The author uses the mistakes made by some of biblical history’s most notorious rebels against God’s prescription for living.

He expertly weaves the narrative to present us with a colorful tapestry of how we shouldn’t conduct our lives. The reverse way of life to that conducted by the Bible’s “bad guys”—the correct way—as we proceed through our given years, thus is almost supernaturally, I think, etched into the reader’s realization.

As I say, Jonathan Brentner, a former pastor, has composed a unique and effective volume for how to avoid many pitfalls into which we are prone to plunge and, of course, later regret.

The emphasis is different in each case the author presents. A key theme of the book, however, always involves encouraging the reader to learn from the mistakes of the characters. Exhortation is geared toward encouraging us to apply Bible precepts rather than give into negative emotions and sinful desires.

A few examples of Brentner’s Bible “bad guys” and their choosing the wrong way are demonstrated in the following.

These and many, many more illustrations make this a book that will enhance anyone’s life who applies these Bible truths to his or her spiritual heart.

The author says his desire in the book is to draw people away from merely relying upon worldly principles and religious behavior. He wishes to, instead, point them toward a true and vital walk with the Lord.

Jonathan writes, “Although I was truly a believer at the time, as a young pastor I treated God as though He was a vending machine. If I behaved a certain way, the Lord, I thought, would respond accordingly. Such was a recipe for disaster when my life went far off the tracks.”

He writes further, “My hope is that my book will help believers deal with emotions and desires when their lives turn out differently than how they imagined. Rather than give in to the negative emotions and desires, I prayerfully hope to draw them to the Gospel, God’s love for them, and their hope for eternity.”

In summary, he writes,” I also pray that many will come to know the Lord as their Savior as a result of reading Shipwrecked!”

The book is also available at amazon.com