Upon the release of my book in 2016, many who read it kindly and generously expressed in Amazon reviews—and to me personally—that they believed it to be one of the best works ever on the topic. Rapture Ready…Or Not: 15 Reasons This Is the Generation That Will Be Left Behind continues to elicit commentary from readers and reviewers that are gratifying—and humbling. Thanks to all who have helped in the book’s success. The Lord must receive all the glory.

All the above is to say that as an author who knows a little about the Rapture because of the months and even years steeped in intensive preparation for the writing of that book, I hope to bring a degree of trustworthiness in recommending to you a truly outstanding documentary and book on the Rapture.

Not only do I recommend this great work because of having enjoyed its content, both Todd Strandberg—founder of raptureready.com—and I, participated in the documentary portion, contributing considerable time in its making. We readily did so, having been asked to join the project by its creator/author, Billy Crone, a prophecy speaker and pastor of a church in the Las Vegas area.

Billy and his staff have put together many, many hours of dissection of this great, future event in the most fascinating and powerful way I have seen. Every detail is carefully considered, yet in methodology that doesn’t bore the viewer-reader. Rather—the dissection ignites in the viewer-reader, the absolute certainty that the Rapture is an event that is on the very cusp of instantaneously changing this world forever.

The results of this presidential election just past—has thrown many questions into the mix for the immediate future regarding America and the world. This documentary and book—put together in the months leading up to the November 8, 2016 election—seems to have been Holy Spirit focused in looking toward what the sudden turnaround in political direction might well mean.

Here is a description of this stunningly appropriate work on the Rapture for these days in which we find ourselves. 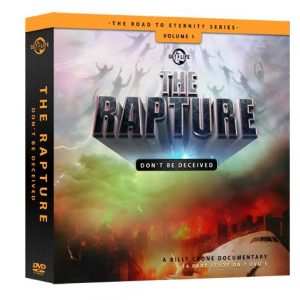 The Rapture – Don’t Be Deceived

If there’s one thing you don’t want to be deceived about in life, it’s the Biblical truth concerning the Rapture. The Bible says that for those who are left behind after this next great event on God’s end time prophetic calendar, they will be thrust into the 7-year Tribulation, which is not a party. Rather, it’s an outpouring of God’s wrath upon this wicked and rebellious planet which will soon turn into mankind’s greatest nightmare! Unfortunately, there seems to be a multitude of opinions out there concerning the purpose and timing of the Rapture, which is starting to cause a lot of unnecessary confusion and division. Therefore, The Rapture: Don’t Be Deceived takes a detective’s approach toward the Biblical teaching of the Rapture and examines the many Scriptural facts surrounding it. You will discover such amazing clues as:

The Rapture: Don’t Be Deceived is not only designed to equip and encourage you in the truth concerning the purpose and proof of the Biblical Rapture, but to also motivate you in sharing the wonderful truth that people don’t have to be left behind at the Rapture. God has provided a way out of this horrible time frame through Jesus Christ and has been warning us about this sudden shocking event for the last 2,000 years!

It’s near and we need to get ready for it! The Rapture: Don’t Be Deceived!