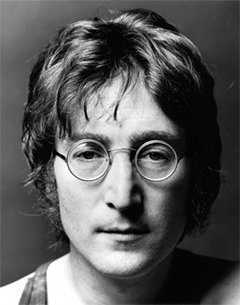 "When I was still a member of the Beatles, I said that we were more popular than Jesus Christ. I now realize that, in time, the Beatles name will faded away, but the name of Christ will last forever."

Factoid - British singer and songwriter. In 1957, he formed the band that became the Beatles, and in the 1960s, he enjoyed enormous success performing with the group and writing songs with Paul McCartney. In 1980 He was murdered by a deranged fan.