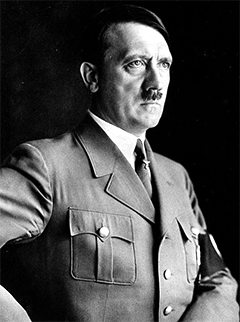 "I am the poster boy for evil. Because I refused to make Christ my moral guide, I allowed Satan to become the master of my fate."

Factoid - Austrian-born founder of the German Nazi Party and chancellor of the Third Reich (1933-1945). His fascist philosophy, embodied in Mein Kampf (1925-1927), attracted widespread support, and after 1934 he ruled as an absolute dictator. His regime was infamous for the extermination of millions of people, especially European Jews. He committed suicide when the collapse of the Third Reich was imminent (1945).