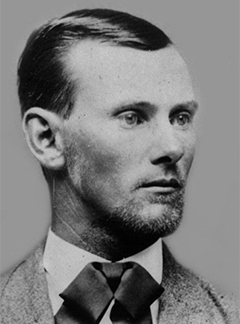 "Crime does not pay because not even the most crafty and elusive criminal can hide from the Eternal Judge."

Factoid - U.S. outlaw. In 1866, Jesse and his brother Frank assembled a gang to rob banks, and they soon began robbing trains and stagecoaches as well. In 1876, Jesse led a failed attempt on a bank in Northfield, Minn.; the brothers escaped, but the rest of the gang was killed or captured. In 1881, Missouri's governor offered a $10,000 reward for their capture. The following year, Jesse was shot in the back of the head by a member of his own gang.