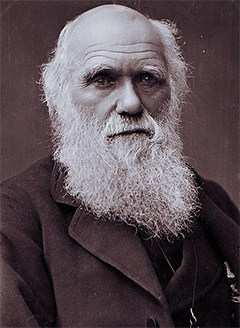 "Well, I made a monkey out of myself. What I thought was a common thread in the evolution of species was actually the artistic theme of a divine creator."

Factoid - Mr. Darwin was by no means the discoverer of the theory of evolution. He is one that is most credited for popularizing the theory. Since the publication of his work, "On the Origin of Species," in 1859, his ideas have come to dominate academia.