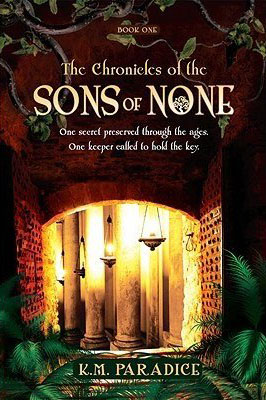 The Creator of all things has said that whatever man has imagined , that he can do (Gen 11:6). Although the context of that declaration is one in which the Creator had to stop man from building the tower that was meant to usurp the Throne of god, the God-Given creative minds of mankind have informed, instructed, and in the case of K.M. Paradice’s novel,  The Chronicles of the Sons of None, entertained us for millennia. Reading this author’s work illustrates in dynamic fashion that imagination was meant to be used for good rather than for evil.

The Chronicles of the Sons of None is, in my estimation, a high fantasy novel worthy in the tradition of J.R.R. Tolkien’s The Lord of the Rings and C.S. Lewis’s Chronicles of Narnia.

Occasionally, rarely, and perhaps only once in a blue moon, some lone soul somewhere on the earth experiences a life-changing epiphany that alters the course of the entire human race. Such is the occasion when Connor Bridges, a recent photography school graduate, has his first encounter with the immortal Joshua.

This is the story of seven adopted siblings, taught by their parents to walk in the ways of God, who find Their strikingly ordinary lives are abruptly and irrevocably altered when they discover their father’s well-kept secret that as a young man he had been contacted by an immortal, Joshua, who prophesied their adoption into the Bridges family before they were born. Their lives are predestined from the foundations of the earth, at least one of them called to be the Keeper of the key, that key which unlocks the best-kept secret since the earth’s creation. And exactly what secret does the elusive key unlock?

Follow Connor’s adventures from the pier at Tybee Island, Georgia, to an ancient Roman villa in Jerusalem, to the warm winter sunshine of South Florida, and to the legendary island nation of Atlantis as he and the key are relentlessly pursued for the interests of both good and evil.  Will Connor fulfill his destiny?

I find the following promotional text about this terrific fantasy work to be accurately descriptive.

“Discover a saga of human and immortal lives intricately intertwined as together they battle Romulus, a never-aging human, once righteous but now a declared enemy of all that is holy, who seeks to dethrone the Almighty Himself. In this heart-pounding odyssey where ageless beings, guardians of the throne of God, take on the form of the sons of Adam, the line separating dreams from reality often blurs as this action-packed tale moves seamlessly between the spirit world and terra firma… You will be thrilled with the description of heaven’s courts where loved ones lost from the shores of earth are eagerly about their Father’s business in eternity. “

K.M. Paradice has indeed produced a  story that evokes in the reader’s imagination, the  highest, most noble qualities of the Creator’s majestic Character as He deals with His Creation.

Kudos to the craftsman of this modern day venture into the realm that melds earthy reality with  the supernatural.

The reader is in for a treat when reading what well might become a tale of classic proportion.