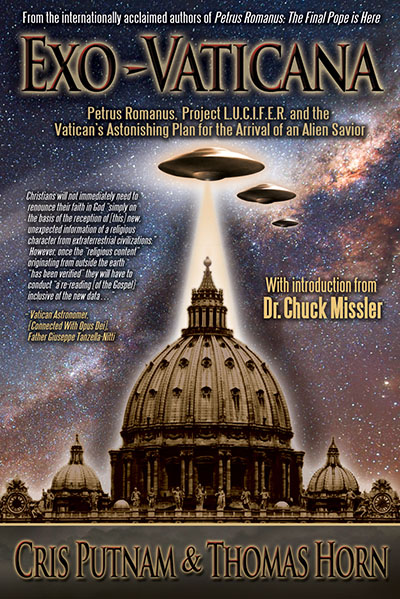 Following hard on the heels of their powerful best seller, Petrus Romanus, Tom Horn and Cris Putnam present for the reader’s quest to know what on earth—and in the heavenlies—is going on a book involving ominous and apocalyptic possibilities–even probabilities.

By delving into the most secretive and influential organization of any sort—the Jesuits of Catholicism—the authors illuminate cabalistic intrigues designed to, perhaps, bring in the world system of control long ago disrupted. The Jesuit order of the Catholic system, so little understood by most, have constructed, it seems, their very own tower as did the Babel builders of the post-antediluvian world.

This tower, however, resides, not on the plains of Shinar in the Middle East, but in the form of Earth’s most powerful telescope atop a mountain in America’s southwest desert. It reaches into the heavenly sphere, according to spectacular research performed personally by Horn and Putnam, to bring down powers that, the searchers believe, will be the savior for this destruction-bent planet.

Written with the highest scholarly acumen, the story of what is truly going on in the Vatican, and why, is nonetheless given in plain, understandable language that will hold the attention of every reader from front cover to back.

Interspersed within these dynamic, fascinating pages is information thought to be part of the perennially taboo blueprints from deep within the bowels of the Vatican. Those designs meld science and spiritism, and make clandestine, connective application to the cult-like ritual, liturgical machinations of the Catholic Church. The blueprint for mankind, as is implied within this book’s title, is supernaturally drawn to specifications that will assure that the Jesuit hierarchy will rule a new world order from the Vatican in Rome.

Horn and Putnam carefully explore how the inner sanctum of the Vatican projects to the outermost reaches of the cosmos in an attempt to form an alliance not unlike Nimrod pursued millennia ago. From the first flying, triangle-shaped, unidentified flying objects reported by a highly respected military flyer in 1947 to reports of  a massive, slowly moving UFO seen by thousands, including the governor of the state in which it was sighted, increase of UFO activity is progressing geometrically. The Vatican-alien connection appears, according to the authors’ research, to be a common thread running throughout the phenomena involved.

More troubling in their findings is the accumulating evidence that, like in the times before the Flood of Noah’s day, sinister forces beyond the human realm are again insinuating themselves into the bloodline of mankind. Like was reported in Genesis chapter 6, these beings are in process, the authors believe the evidence indicates, of mingling their seed with the seed of man.

The intentions of the powers and principalities from the earliest days of human beings populating planet Earth, according to the Bible, was to replace the God of Heaven with their own rule of this fallen sphere. Some Catholic clergy have expressed thoughts that such an alliance of the Vatican with alien consorts could be a counter-salvation methodology or an extra-salvation methodology to redeem mankind.

One statement from a Catholic father offered: “[The extraterrestrials’] version of salvation might be based on a savior other than Jesus…even a messianic member of their own race. These beings, closer to God than man (perhaps even unfallen), would possess superior theology that could ‘expand markedly’ our terrestrial understanding of redemption and knowledge of God.”

The part the Vatican is playing in this grand scheme to control what some would-be masters perceive will be a universal utopia, under the benevolent auspices of fellow beings from far-flung places in the cosmos, is examined in depth in this volume. For me, Exo Vaticana goes a long way toward providing insights into these strange times in which we find ourselves.

I highly recommend you read and re-read this extremely well-researched and well-written book.