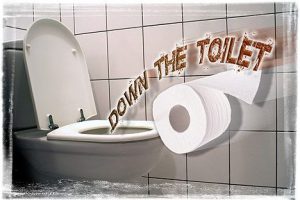 I have always been fascinated by how our standards of morality change over time. What was taboo a few years ago is not even worthy of debate today. The interesting part is how this process goes on unnoticed.

Recently, I was watching a program on PBS about the history of late-night television. In one segment, the program announcer talked about “The Tonight Show” on NBC. In the early ’60s, it was hosted by the late great Jack Paar.

On February 11, 1960, Jack Paar famously walked off his show for a month after NBC censors edited out a segment, filmed the night before, about a joke involving a W.C. Being a thin-skinned emotional type, Paar abruptly quit the show four minutes into a live program.

As he left his desk, he said, “I am leaving “The Tonight Show.” There must be a better way of making a living than this.”

Parr returned a month later and opened with the famous line, “As I was saying before I was interrupted: When I walked off, I said there must be a better way of making a living. Well I’ve looked and there isn’t. Be it ever so humble, there is no place like Radio City.”

I was interested in finding the joke that caused all the trouble, so I did a quick search of Google and found several sites posting the infamous gag. It is so tame by today’s standards, you would probably have a hard time convincing someone unfamiliar with the incident that it was once censored.

There is no sexual reference at all. You might call it bathroom humor, but of the tamest variety. Here is the full text of the joke:

In the days when you couldn’t count on a public facility to have indoor plumbing, an English woman was planning a trip to Germany.

She was registered to stay in a small guest house owned by the local schoolmaster. She was concerned as to whether the guest house contained a WC. In England, a bathroom is commonly called a WC, which stands for water closet. She wrote the schoolmaster inquiring into the location of the nearest WC.

The schoolmaster, not fluent in English, asked the local priest if he knew the meaning of WC. Together they pondered possible meanings of the letters and concluded that the lady wanted to know if there was a “Wayside Chapel” near the house . . . a bathroom never entered their minds. So the schoolmaster wrote the following reply:

I take great pleasure in informing you that the WC is located 9 miles from the house. It is located in the middle of a grove of pine trees, surrounded by lovely grounds. It is capable of holding 229 people and is open on Sundays and Thursdays. As there are many people expected in the summer months, I suggest you arrive early. There is, however, plenty of standing room. This is an unfortunate situation especially if you are in the habit of going regularly.It may be of some interest to you that my daughter was married in the WC as it was there that she met her husband. It was a wonderful event. There were 10 people in every seat. It was wonderful to see the expressions on their faces. My wife, sadly, has been ill and unable to go recently. It has been almost a year since she went last, which pains her greatly.

You will be pleased to know that many people bring their lunch and make a day of it. Others prefer to wait till the last minute and arrive just in time! I would recommend your ladyship plan to go on a Thursday as there is an organ accompaniment. The acoustics are excellent and even the most delicate sounds can be heard everywhere. The newest addition is a bell which rings every time a person enters. We are holding a bazaar to provide plush seats for all since many feel it is long needed.

I look forward to escorting you there myself and seating you in a place where you can be seen by all.

With deepest regards,
The Schoolmaster

If the same censors who worked at “The Tonight Show” in 1960 were teleported through time to work on the program today, I would guess they would regard the content of nearly every show as being over the line. Speaking of censorship, I can’t recall the last time there was a problem with any network program. A star will occasionally drop the F-bomb on a live show and suffer no consequence.

The last time we’ve had a national discussion about morality was four years ago when Janet Jackson’s breast was exposed for half a second on CBS TV during the 2004 Super Bowl halftime show. The steady flow of filth in movies, music, and TV that we see every day doesn’t set off any alarm bells.

It is amazing what late-night comedians are able to get away with these days. When Michael Jackson was on trial, I couldn’t believe that we had descended to the point of joking about a man being a pedophile. I had the same reaction when Idaho Senator Larry Craig was made the butt of late-night humor when he was arrested for soliciting gay sex in an airport men’s room.

What makes our slide into barbarity so important to prophecy is the fact that our current moral state matches what the Bible predicted. We are warned that the last days will come when the morality of the world equals the level of evil Lot witnessed in Sodom . If we’re not there yet, we must be very close.

“Likewise also as it was in the days of Lot; they did eat, they drank, they bought, they sold, they planted, they builded; But the same day that Lot went out of Sodom it rained fire and brimstone from heaven, and destroyed [them] all. Even thus shall it be in the day when the Son of man is revealed” (Luke 17:28-30).