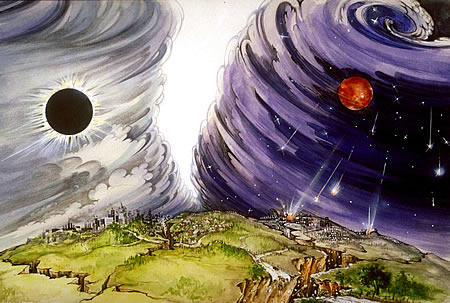 A popular radio talk show host on an Oklahoma City secular station recently interviewed me live on the air via telephone. He had seen an article I had written about the financial accountability of Christian ministries, and he had liked it.

He began the interview by graciously giving me the opportunity to talk non-stop for about ten minutes about the way God had transformed my life and called me into the ministry. We then moved on to a discussion of the scandals that had recently rocked the Christian community nationwide.

The Unmentionable Word
Everything went well until the host asked me to summarize the fundamental message of my ministry. I responded by saying that God had called me to proclaim “the soon return of Jesus in wrath.”

Before I could proceed with my explanation, the announcer cut me short. “What do you mean, ‘wrath’?” he asked.

“I mean that Jesus is going to return very soon to pour out the wrath of God upon those who have rejected God’s love and grace and mercy.”

“Your God is a monster God!” he snapped. He then added, “I happen to be a Christian, and I can tell you that my God wouldn’t hurt a flea!”

That was the end of the interview. He hung up on me. I was not given an opportunity to respond to his blasphemy of God.

Satan’s Grand Deception
The radio host’s vehement response to the wrath of God did not surprise me. It is characteristic of both Christians and non-Christians, and I have encountered it many times.

Satan has sold the world a bill of goods concerning the nature of God. Most people, both Christian and non-Christian, tend to view God as being a sort of cosmic teddy bear.

They see Him as big and warm and soft, full of infinite love and forgiveness. He couldn’t hurt a fly, and He certainly wouldn’t be so cruel as to condemn or harm any beings created in His own image. On the Day of Judgment, God will simply give everyone a big hug and wink at their sins.

The only problem with this wonderfully comforting image is that it is a lie straight from the pit of Hell.

Two of my favorite passages in the Bible emphasize the personal loving nature of God. One was penned by the apostle Peter. In 1 Peter 5:6-7 he says that we are to cast all our anxieties upon God “because He cares for you.” That is a very comforting thought.

The other passage that I love to read over and over consists of words spoken by the prophet Jeremiah in Lamentations 3:22-24 (RSV):

“The steadfast love of the Lord
never ceases,
His mercies never come to an end;
They are new every morning;
Great is Thy faithfulness,
‘The Lord is my portion,’ says
my soul,
‘Therefore I will hope in Him.”

But the Bible also clearly teaches that there is another aspect of God’s character that is equally important. It is the aspect that Satan wants us to ignore, and he has been very successful in prompting ministers to overlook it. After all, it doesn’t produce popular sermons! I’m speaking, of course, of the holiness of God (Leviticus 11:44; Isaiah 6:3; 1 Peter 1:16).

Grace or Wrath?
The Bible teaches that God is perfectly holy. Because of this attribute of His character, He cannot tolerate sin (Numbers 14:18). The Bible says God must deal with sin, and He does so in one of two ways — either grace or wrath.

Every person on the face of this earth is at this moment under either the grace of God or the wrath of God. Jesus Himself made this point in His discourse with Nicodemus.

In the same conversation in which Jesus spoke the glorious words about God’s love in John 3:16, He also spoke of God’s wrath in a verse that we like to ignore: “He who believes in the Son has eternal life, but he who does not obey the Son shall not see life, but the wrath of God abides on him” (John 3:36).

The apostle Paul emphasized this point in his preaching and teaching. In Ephesians 5 he warns against immorality, covetousness, and idolatry, and then he adds this observation: “Let no one deceive you with empty words, for because of these things, the wrath of God comes upon the sons of disobedience” (Ephesians 5:6).

We come under God’s grace by placing our faith in Jesus and appropriating His atoning sacrifice for our lives ( 1 John 1:7). There is no salvation apart from Jesus (Acts 4:10-12). Those who have rejected God’s free gift of grace in Jesus are under God’s wrath (John 3:36), and they have no one to blame but themselves.

The Coming Wrath
God’s wrath will fall when Jesus returns (Jude 14-15). The passage in Revelation which pictures the return of Jesus says that He will return in righteousness to “judge and wage war” (Revelation 19:11).

The presidents and kings and prime ministers of the world will get on their knees and cry out for the rocks and mountains to fall upon them, so great will be the terror of the Lord (Revelation 6:15-17). The unrighteous will stumble about like blind men, and their blood will be poured out like dust (Zephaniah 1:17).

The Meaning of Wrath
Does this make God a “monster”? No! On the contrary, it proves His goodness, for how could a good God ignore the evil of sin and allow it to go unpunished? His wrath against evil will demonstrate His righteousness.

The prophet Nahum summed it up best. Writing of the love of God, he said, “The Lord is good, a stronghold in the day of trouble, and He knows those who take refuge in Him” (Nahum 1:7). But a few verses earlier Nahum had also spoken of the holiness of God:

“The Lord is avenging and wrathful.
The Lord takes vengeance on His
adversaries,
And He reserves wrath for His enemies.
The Lord is slow to anger and great
in power,
And the Lord will by no means leave
the guilty unpunished.”
— Nahum 1:2-3

God’s wrath is never motivated primarily by a desire to punish. Rather, it is designed to bring people to repentance so that they might be saved. Even in His wrath, God remembers mercy.

God demonstrates His mercy in wrath by never pouring out His wrath without warning. He tried to warn Sodom and Gomorrah through Abraham. He warned Noah’s world through the preaching of Noah for 120 years. He sent both Jonah and Nahum to warn the pagan city of Ninevah.

Consider too how He sent prophet after prophet to call the nations of Israel and Judah to repentance:

“And the Lord, the God of their fathers, sent word to them again and again by His messengers, because He had compassion on His people and on His dwelling place; but they continually mocked the messengers of God, despised His words and scoffed at His prophets, until the wrath of the Lord arose against His people, until there was no remedy.” — 2 Chronicles 36:15-16

God’s mercy in wrath is also manifested in the fact that He always leads up to His final outpouring of wrath through a series of progressive judgments. These judgments are outlined in detail in Deuteronomy 28:15-57.

This characteristic of God’s wrath is demonstrated in the prophecies concerning the Tribulation. Rather than simply pouring out His wrath on the rebellious nations of the world, destroying them in one instant of overwhelming catastrophe, He subjects the world to a series of judgments that sequentially increase in scope and intensity (Revelation 6,8-9,16).

Although most people refuse to repent in response to these judgments (Revelation 9:20-21), there is “a great multitude, which no one could count, from every nation and all tribes and peoples and tongues” who do repent and respond to Jesus in faith (Revelation 7:9).

These radically different responses to the wrath of God illustrate the point that is often made by Billy Graham: “The same sun that melts the butter also hardens the clay.” The wrath of God melts some hearts in repentance, but it has the effect of hardening the hearts of many others.

Wrath and the Redeemed
Many Christians respond negatively to Bible prophecy. It’s not at all unusual to hear a Christian say something like this: “I don’t want to hear anything about prophecy because it’s too full of gloom and doom.”

Well, there is a lot of gloom and doom for those who refuse to respond to God’s gift of love in Jesus. But there is only good news for the Redeemed.

The Old Testament ends with a passage that presents both the gloom and the joy of end time prophecy. Malachi says that when the Lord returns, the day will be “like a furnace; and all the arrogant and every evildoer will be chaff” (Malachi 4:1). That’s the bad news.

But consider the good news: “But for you who fear My name, the sun of righteousness will rise with healing in its wings; and you will go forth and skip about like calves from the stall” (Malachi 4:2).

A Plea
Are you under grace or wrath? The choice is yours. Jesus is coming soon. When He appears, will He be your Blessed Hope or your Holy Terror? Will you cry for the mountains to fall upon you? Or, will you go forth leaping with joy like a calf released from a stall?

God loves you and He wants you to accept His Son as your Savior so that you will come under grace and can participate in an event described by Isaiah:

“And the ransomed of the Lord will return,
And come with joyful shouting to Zion,
With everlasting joy upon their heads.
They will find gladness and joy,
And sorrow and sighing will flee away.”
(Isaiah 35:10)

David Reagan stands among that rare breed of individuals that are well-known for being a dependable source of reliable information on End Times Prophecy, the Pre-Tribulation Rapture, as well as other Bible topics. He has written six books: Trusting God, The Christ in Prophecy Study Guide, The Master Plan, Living for Christ in the End Times, Jesus is Coming Soon! (a book for children), and Wrath & Glory: The Meaning of Revelation.

His web address is http://www.lamblion.com