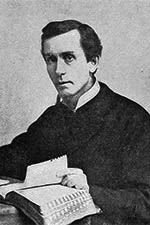 Martin Knapp was born on March 27, 1853, in a log cabin in southern Michigan. With $50 received from selling a calf, Martin enrolled, at 17, at a Methodist college in Albion, Michigan. Knapp’s first pastorate was a circuit assigned to him in 1877 by the Methodist Michigan Conference. In September 1897, the International Holiness Union and Prayer League was organized in Knapp’s home. He died December 7, 1901, at the age of 48, leaving behind him various thriving institutions, each in its own way perpetuating his influence and his message.

Rescued Or The River of Death