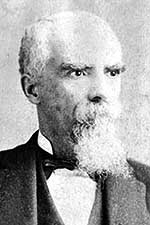 Edward McKendree Bounds (1835-1913), Methodist minister and devotional writer, was born in Shelby County, Missouri. He studied law and was admitted to the bar at 21 years of age. After practicing law for three years, he began preaching for the Methodist Episcopal Church. After the Civil War, Bounds served as pastor of churches in Tennessee and Alabama, and in St. Louis, Missouri. He spent the last 17 years of his life with his family in Washington, Georgia, writing his Spiritual Life Books.

Chapter 1 – Men of Prayer Needed
Chapter 2 – Our Sufficiency Is of God
Chapter 3 – The Letter Killeth
Chapter 4 – Tendencies to Be Avoided
Chapter 5 – Prayer, the Great Essential
Chapter 6 – A Praying Ministry Successful
Chapter 7 – Much Time Should Be Given to Prayer
Chapter 8 – Examples of Praying Men
Chapter 9 – Begin the Day with Prayer
Chapter 10 – Prayer and Devotion United
Chapter 11 – An Example of Devotion
Chapter 12 – Heart Preparation Necessary
Chapter 13 – Grace from the Heart Rather than the Head
Chapter 14 – Unction a Necessity
Chapter 15 – Unction, the Mark of True Gospel Preaching
Chapter 16 – Much Prayer the Price of Unction
Chapter 17 – Prayer Marks Spiritual Leadership
Chapter 18 – Preachers Need the Prayers of the People
Chapter 19 – Deliberation Necessary to Largest Results from Prayer
Chapter 20 – A Praying Pulpit Begets a Praying Pew

The Necessity of Prayer