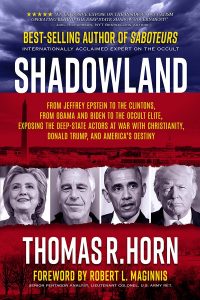 From Jeffrey Epstein to the Clintons, from Obama and Biden to the Occult Elite:

Exposing the Deep-State Actors at War with Christianity, Donald Trump, and America’s Destiny

My friend Tom Horn indeed pushed my fascination button with his latest book. It is one of only two books I’ve personally explored that gets into most all of the evil, clandestine crevices of what this nation has endured for more than three years.

I refer to the never-ending lies and innuendo hurled at the candidate, then the president-elect, and finally, the president—Donald J. Trump.

To the discerning observer from the biblically prophetic perspective, the absolute hatred and rage goes far beyond political, ideological differences. It is all out-war waged by human, reprobate-thinking pawns driven by the “powers and principalities” of Ephesians 6:12: “For we wrestle not against flesh and blood, but against principalities, against powers, against the rulers of the darkness of this world, against spiritual wickedness in high places.”

It is as if these “rulers in high places” have driven the human, anti-God forces into thinking totally contrary to human reason. Certainly, it is thinking that is in opposition to the Creator of humankind’s instruction book for godly comportment—the Bible.

Because those who call themselves “the Resistance” openly declare God’s rules for living to be intolerance and even hate, Heaven has turned them over to a reprobate mind.

The Apostle Paul wrote under the Inspiration of the Holy Spirit about those who reach this level of rebellion: “And even as they did not like to retain God in their knowledge, God gave them over to a reprobate mind, to do those things which are not convenient” (Romans 1:28).

SHADOWLAND by Dr. Thomas R. Horn is the book for the reader who desires to know the real reasons for the seeming insanity and warfare waged by the “Resistant” political party and mainstream news and entertainment media.

The foreword is presented by Robert L. Maginnis, a West Point graduate and a retired U.S. Army lieutenant colonel who now serves as a senior Pentagon analyst. He is a frequent contributor to Fox News and Fox Business programs.

Col. Maginnis says, in part, the following about this masterful work by Dr. Horn.

Shadowland explodes those occult influences hidden especially within Washington’s deep state, our morally lost culture as well as thanks to the “leadership” of the progressive political movement that is determined to seize the reins of America through their nefarious, evil ways.

That’s why I’m both excited about Tom’s new work, but also sobered—and, frankly, frightened because if the current direction of America isn’t quickly reversed, all hope is lost. Shadowland addresses true, although shocking accounts of real elites and actual tragic events we’ve all heard about in the nightly news that reflect just how far America has fallen, especially in the last couple decades. Tom provides us a new perspective on how this rampant evil could lead to America’s demise, a pleasing outcome for the world’s dark forces.…

Shadowland comes onto the scene just as Americans voters begin to focus on the critical 2020 presidential election to decide which road to take into the future. It’s an open-eyed primer to help especially spiritually aware Christians to understand just what’s at stake and it lifts the veil on the future to reveal America’s possible demise shedding light on whether this once great nation can reverse course and be relevant at the not too distant prophetic end time.

SHADOWLAND gets to the very bottom of the intrigues of the “swamp,” to be sure. And it is indeed dark, putrefied muck. But, Tom knows the ultimate outcome of all the end-times machinations prophesied to be faced by those alive as Christ’s return nears. He knows the end of these things, because he knows the coming King of all Kings. He knows Jesus Christ as Lord and Savior –the heavenly Bridegroom who will soon take His Bride out of harm’s way to mansions He has prepared for those who are believers.

This is a book for these troubling though exciting times so near that glorious moment!

From Jeffrey Epstein to the Clintons, from Obama and Biden to the Occult Elite:

Exposing the Deep-State Actors at War with Christianity, Donald Trump, and America’s Destiny