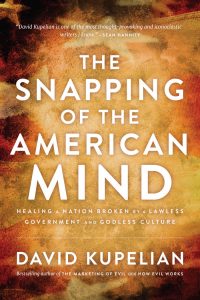 The Snapping of the American Mind:  Healing a Nation Broken by a Lawless Government and Godless Culture :: By David Kupelian

The Trump Derangement Syndrome in a nutshell –this was my first mental picture in learning of the title of this book. There is no question within the mind of any rational observer of American society and culture. Something infernally wicked has injected evil into the national psyche since the presidential election of 2016. The dementia is progressing geometrically.

The Snapping of the American Mind is the volume you must get, read and study to be brought into full realization of what this madness is all about. I promise that the study part of this recommendation will not be labor intensive. You will be swept along, as was I, by author David Kupelian’s masterful dissection of every nuance of the national turmoil in which we’ve been embroiled for the past 3 years.

The reading of this book is an endeavor that every American who loves and is concerned about our nation’s future will find not only worthwhile but absolutely crucial as we move toward the darkening, Biblically prophetic horizon.

Roots of this present national descent into madness sprang forth from seeds of humanistic hubris. “We will have no deity to rule over us,” was and continues to be the sin-ridden declaration that feeds the cultural and societal insanity that plagues us. Kupelian reaches back into the historical soil from which the rebellion was spawned and makes understandable the rage against everything that was once held sacred to the nation’s founding.

In The Snapping of the American Mind, veteran journalist and bestselling author David Kupelian shows how the progressive Left – which today dominates America’s key institutions, from the news and entertainment media, to education, to government itself – is accomplishing much more than just enlarging government, redistributing wealth and de-Christianizing the culture. With the Left’s wild celebration of sexual anarchy, its intimidating culture of political correctness, and its incomprehension of the fundamental sacredness of human life, it is also, whether intentionally or not, promoting widespread dependency, debauchery, family breakdown, crime, corruption, addiction, despair and suicide.

Surveying the growing chaos in American society, Kupelian exposes both the utopian revolutionaries and their extraordinary methods that have turned America’s most cherished values literally upside down – to the point that madness is now celebrated and normality demonized.

In The Snapping of the American Mind, you’ll discover:

Fortunately, The Snapping of the American Mind also explores how America truly can be restored to her former, and still underlying, goodness and greatness – and just as important, how individuals, despite living in an age of high anxiety, moral confusion and growing chaos, can find genuine happiness and personal healing.

One endorser of The Snapping of the American Mind, whose name you will recognize, writes the following.

“David Kupelian is one of the most thought-provoking and iconoclastic writers I know. Agree or disagree, David is a must-read if you really want to understand the world we live in and where it’s headed.”

David Kupelian is an award-winning American journalist, vice president and managing editor of online news giant WND, editor of Whistleblower magazine, and a widely read columnist. The author of two other influential books – The Marketing of Evil published in 2005 and its 2010 sequel How Evil Works – Kupelian has been featured on Fox News, MSNBC, C-SPAN, CBN, and many other TV and radio venues.

This book is truly the best volume I’ve found for exploration of, in real time, causes and effects of the reprobate mind (Romans 1:28) – that irrational, evil, dissidence  collectively suffered by many in America today. The Snapping of the American Mind, I believe, should be used closely in conjunction with other vital study resources as the student of God’s Word on prophecy prayerfully considers issues and events of these troubled though exciting times.

The Snapping of the American Mind:  Healing a Nation Broken by a Lawless Government and Godless Culture