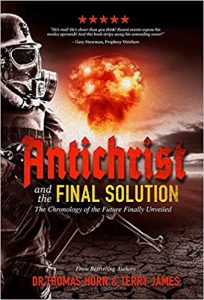 ANTICHRIST and The Final Solution

To view Terry’s first of four interviews on Skywatch TV and view the trailer for this new, dynamic book, click here.

Everywhere we look on the horizon of culture and society today, we see chaos and evil assaulting life as we knew it just a few short months ago.

“Those who do not know history are doomed to repeat it.” —Edmund Burke

Lest we think that evil men have changed in their capability of perpetrating horrendous atrocities against their fellow man, we should heed Burke’s words. If we forget that in the sin-blackened human mind resides the thought to inflict evil intentions on others, we’ll eventually suffer consequences of that forgetfulness.

Absolute control of all of humankind was in the mind of the first rebel, Lucifer. Through that being’s seduction, people of the world have been infected with evil that has potential to afflict others with brutality exactly like that demonstrated by Hitler, Stalin, Mao, and every other deadly tyrant of history.

To forget this lesson is to invite would-be tyrants of the future to take our liberties and even our lives.

Most within the Western democracies have forgotten the admonition of those like Burke. Many simply are too busy going about life’s daily movement to pay attention.

Bible prophecy tells of a coming tyrant who will be the deadliest in human history. Antichrist will try to carry out Satan’s “Final Solution,” a plan to inflict genocide far beyond that done through Adolf Hitler’s plan by the same name.

The holocaust during that soon-to-come era is almost upon this rebellious world.

God has forewarned of these things through His love letter to those created in His image—humankind. This volume presents, layer upon layer, the exact unfolding of the prophetic events to take place.

From people’s inhumanity to one another to the triumphant return of Jesus Christ and His magnificent, thousand-year reign on a remade, pristine planet, the complete foretelling is between these pages.

To order your copy of Antichrist and the Final Solution, go to the Skywatch TV Store or find it on Amazon here.