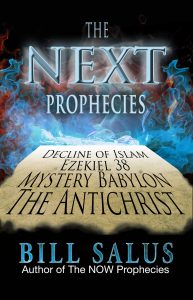 The Next Prophecies   by Bill Salus

My good friend Bill Salus continues his prolific writing quest. His God-Engendered drive, it is obvious to those who know him, is focused on informing all who will seek Truth about Biblical prophecies given for these last of the last days.

Some are calling his new book perhaps the best book on Bible prophecy yet future they have read. I certainly can commend it to you as Biblically-centered dissection of today’s issues and events as thoroughly researched and presented as any book of recent times.

The author says the following about this quest to deliver God’s prophetic Message to this generation.

There are three easy to understand categories of coming biblical prophecies. They are the;

The NOW Prophecies are the unfulfilled ancient biblical predictions that appear to be imminent, which means they could happen NOW! These foretellings have either minor or no remaining preconditions inhibiting them from happening.

Some of the NEXT PROPHECIES that are explored in this book are:

THE NEXT PROPHECIES transports the reader into the mysterious Pre-Tribulation time-gap that no man has dared to enter into before. The book uncovers what appears to be the true content of the false covenant that triggers the Tribulation period. It unveils the motivations behind Israel’s desperate need to become a signatory of the false covenant. And, it reveals the mystery of end times Mystery Babylon.

The Next Prophecies book presents many new prophetic insights like all of the Bill Salus books do.  It is a quick and easy read of only 240 pages that promises to;

“The LAST Prophecies still have significant preconditions preventing them from finding fulfillment. They will find fulfillment relatively soon, but the LAST’s must wait in line behind the NOW’s and NEXT’s for their turn on the prophetic timeline. This book will be written in the future to complete this end times book series.”

Click this link to purchase THE NEXT PROPHECIES book. http://ecommerce.solutionsimplicity.com/index