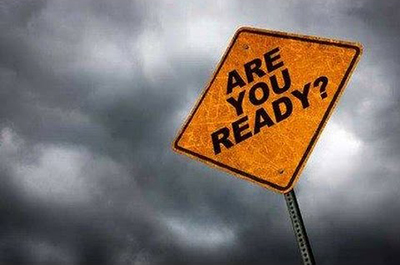 Outside my front window is a rose bush, a Peace Rose. Back in the summer last year it produced one, then several beautiful roses. Then I cut the faded ones back, and new branches came out and budded. The buds felt cool, and I wondered if they would fully blossom before frost came. But they did and gradually unfolded into large, full-bodied roses of beautiful colors. That is the way the signs of the times are unfolding into a beautiful fulfillment of our “Looking for that Blessed Hope and the glorious appearing of our great God and Savior Jesus Christ” (Titus 2:13) that believers have been so long anticipating.

After Jesus told us, “When these things begin to happen, look up, for your redemption draws near” (Luke 21:28), He told of the blossoming of the fig tree, a symbol of the nation of Israel, indicating the rebirth of the nation. This happened on May 14, 1948, having been in the budding stage since at least the Balfour Declaration by the British in 1917. As the rose unfolds, so did this sign of the times, which marked a turning point for dating the beginning of the last days or .

After Ezekiel wrote that in Ezekiel 37, where he told of a valley of dry bones being restored to fully fleshed-out and alive bodies, he spoke to the Hebrew people this from the heart of God:

“Moreover I will make a covenant of peace with them, and it shall be an everlasting covenant with them; I will establish them and multiply them, and I will set My sanctuary in their midst forevermore. My tabernacle also shall be with them; indeed I will be their God, and they shall be My people. The nations also will know that I, the Lord, sanctify Israel, when My sanctuary is in their midst forevermore” (Ezekiel 37:26-28).

Signs of the Times
This covenant of God is forevermore. The one that Daniel reports in Daniel 9:27 is one that only lasts for seven years and appears to be one that is imposed upon Israel by a secular entity – the United Nations, in all likelihood. In the , both reports of covenants appear to be parallel. Is God answering and reassuring Israel of His long-term intentions for their benefit and blessing?

This seven-year covenant apparently is the missing 70 of judgment upon Israel that is told about earlier in Daniel’s prophecy, which stops at the end of the 69 . This final period concludes with the Antichrist cancelling that covenant and shutting down the sacrifices and offerings in the temple that had just been rebuilt. That deceiver then enters the temple, declaring himself God and demanding that all people worship him.

This is again by Paul in his second letter to the Thessalonians. It is the abomination of desolation of the temple foretold also by Daniel and again by Jesus a future event that occurs in that last half of the seven-year tribulation:

“Therefore when you see the ‘abomination of desolation,’ spoken of by Daniel the prophet, standing in the holy place (whoever reads, let him then let those who are in Judea flee to the mountains” (Matthew 24:15-16).

Signs of the Times
The pattern of responses to Israel’s attempts to trade land for peace so far has shown in securing that peace—thinking of the Gaza transfer—and punishment upon Israel’s attending prime ministers as well.

The start of it with Prime Minister Yitzhak Rabin was on September 28, 1995, when the Second Oslo Accord was officially signed, pointing to a 2005 actual transfer. Prime Minister Rabin was assassinated on November 4, 1995. When the Gaza Strip transfer was made on November 4, 2005, Ariel Sharon was Prime Minister of Israel and was responsible for the details of the transfer of all properties to the Palestinians. Then, he was incapacitated by a stroke in January 2006, and lay in a coma for the next eight years, dying on January 11, 2014.

What does all of this tell us? Possibly, and quite probably, God does not approve of the transfer of land for peace. It looks like, now, that the settled covenant that will be imposed upon Israel and the Palestinians will involve more land swaps and a two-state solution. What will be God’s response? He does not approve of Israel giving away land that was promised to Israel in past centuries.

The Apostle Paul tells us in 1 Thessalonians 5:2-3: “For you yourselves know perfectly that the day of the Lord so comes as a thief in the night.  For when they say, ‘Peace and safety!’ then sudden destruction comes upon them, as labor pains upon a pregnant woman. And they shall not escape.”

Signs of the Times
“They” and “them” are those who will experience sudden destruction. Who now wants peace and safety because her neighbors want to wipe them off the face of the earth, according to Psalm 83? It is Israel.

It appears to be the result of that covenant of Daniel 9:27 that gives them seven years of false peace. It introduces that Jeremiah 30:7 calls “the time of Jacob’s trouble.” They will build a new temple, however, as has been a strong desire and plan of Israel for a very long time. Halfway through the seven years, however, the Antichrist will invade the temple, shut down its sacrifices and offerings and declare himself to be God, demanding that all worship him as God. In 2 Thessalonians 2 and Revelation 13 and 17 it speaks of this, and earlier in this report.

At the beginning of that time, however, the “sudden destruction” that comes like a thief in the night with the Day of the Lord is the result of the Rapture of the believers in Christ, for that worldwide extraction of a great multitude of people suddenly will cause widespread havoc and terror.

Signs of the Times
Overshadowing that time of the confirmation of the covenant and the Rapture is the invasion of Israel by Gog of the far north, or Russia. If we think chronologically, Ezekiel writes that in Ezekiel 38 and 39, following his telling of God’s promise of an everlasting covenant for Israel. Then in Ezekiel 40, he begins a detailed description of how to build the temple.

To me, it seemed impossible for there to be a way to get Russia, now in the Middle East, back up to the far north, with her back turned away in disinterest in anything down south. And then, God would turn her around, put hooks in her jaws, and drag her back upon the mountains of Israel for that destructive war Ezekiel in Ezekiel 38-39.

Then it exploded in my mind!

God has already done that at the end of the Cold the Soviet Union was dismantled and Russia was in defeat and shame. Her back was turned on Israel. Then, Vladimir Putin rose up with Russian pride possessing him and began to see the plunder possible in the Middle East, and especially Israel. Gog is already down there, ready to pounce.

The coming signs of the times certainly involves this, the Gog-Magog . Notice particularly though, that Ezekiel does not mention the how the temple is allowed to be rebuilt. That is all of secular doings, while he is concerned with Israel activities. He goes directly from the promise of an everlasting the war, then the temple’s rebuilding in Ezekiel 40.

Joel’s prophecy seems to indicate a more deadly, awesome time of judgment that would occur during the last half of the tribulation period such as at the battle of Armageddon. This period is also called the Great Tribulation, indicating a greater and more awesome judgment, though that first half of the period is not without its share of tribulation.

Signs of the Times
When current events happen and are identified with Bible prophecy, it stirs up excitement in the hearts of those who have been watching those things. The election of Donald Trump as President of the United States has brought the destiny of the nation of Israel front and center because of his intention of solving Israel’s difficulties in the Middle East. He has ordered the moving of the US Embassy from Tel Aviv to Jerusalem, and he has put together an envoy headed by his Jewish son-in-law that has been busy on the renewal of peace-agreement talks with a view of success.

Benjamin Netanyahu, Prime Minister of Israel, has stated that Israel is not against a two-state solution to arrive at an agreement of peace with the Palestinians; it is they who are against it. The Palestinians refuse to recognize Israel’s existence at all. An imposed covenant by the United Nations could be the the not-too-far future.

An event explosion of that nature would launch the Rapture and the seven years of tribulation in which the body of Christ, the true church, will have no part here on earth.

Thus, there will be the unfolding, like the rose by my front window, of the events of the coming of Jesus at the sound of the trumpet!

Gene Lawley, now retired, has had a career in public accounting as a CPA with an MBA degree from the University of Colorado. In his undergraduate studies at Northeastern State University in Tahlequah, Oklahoma, he majored in business with accounting emphasis and minored in English and journalism. In college he held several positions on the college newspaper, including editor for a year and a half. His writing interest then was in features, but in recent years his interest in Bible prophecy and current events, along with basic biblical principles for living has dominated his writing efforts. Gene Lawley’s work is recognized around the globe as the authoritative word on the Pre-Tribulation Rapture and End Times Prophecy.

He accepted Christ on January 6, 1956, and after a time in the Army, spent almost twelve years on the staff of The Navigators in Colorado Springs, Colorado, where he met his wife, Marge. They have two grown children and four grandchildren. Gene and Marge live in Twin Falls, Idaho.