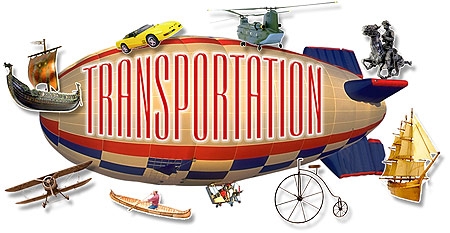 “Many will rush here and there, and knowledge will increase” (Dan 12:4).

2000
Horses are domesticated and used for transportation.

200 AD
The wheelbarrow is invented.

1623
Dutchman Cornelius Drebbel, employed by James I of England, built the first working submarine on the Themes river.

1903
The Wright Brothers invent and fly the first engined airplane

1982
Magnetic Levitated train  – One of the latest advances is the development of Magnetic Levitated train or MagLev train for short. By using magnetic force, MagLev trains “float” in the air (levitation) above the track without the need of any physical support, thus removing all the friction between the train and the track. The phenomenon of levitating an object with a magnetic force is known as magnetic levitation. In a stable magnetic levitation, the weight of the levitated object is balanced by the magnetic force.

Shuttle Main Engine Margin Improvement Program – Improvements to the SSMEs for increased margin and durability began with a formal Phase II program in 1983. Phase II focused on turbomachinery to extend the time between high-pressure turbopump overhauls by reducing the operating temperature in the high-pressure fuel turbopump and by incorporating margin improvements to the HPFT rotor dynamics (whirl), turbine blade and HPFT bearings.

1986
Improvements to Space Shuttle Main Engine Margins (SSME) – To certify the improvements to the SSMEs and demonstrate their reliability through margin (or limit testing), an aggressive ground test program was initiated in December 1986. From December 1986 to December 1987, 151 tests and 52,363 seconds of operation (equivalent to 100 shuttle missions) were performed.

Ballistic Electron Emission Microscopy or BEEM is a technique for studying ballistic electron transport through variety of materials and material interfaces. BEEM is a three terminal scanning tunneling microscopy (STM) technique that was co-invented in 1988 at the Jet Propulsion Laboratory in Pasadena California by L. Douglas Bell and William Kaiser.

2001
The Transportation Security Administration (TSA) is an agency of the U.S. Department of Homeland Security that exercises authority over the security of the traveling public. Since its inception multiple complaints of passenger abuse by TSA screeners have been reported and captured on tape. It was signed into law on November 19, 2001 by George W. Bush. The TSA operates in U.S. airports but a government  expansion under the banner of “security” into other modes of transportation and various public locations is being considered.

Hybrid Cars – Compact Power Inc. factory opened on July 14, 2010 in Holland Michigan. The company received $151 million in federal Stimulus money to open the plant, which makes lithium cells for plug-in hybrids. The regulatory stats for smaller, lighter cars have proven to be less safe with a history of high-death tolls. The cost of hybrids is very high to comparably equipped gasoline vehicles ranging from ($1,700 to $11,200). Most consumers are not eager to risk their lives in exchange for a very small battery-operated car.

2011
Gas Prices Still Climbing –  As of September, 2011 the average price for gas was $3.56, the highest ever up to this point for a year,  although Tom Kloza of the Oil Price Information Service predicted Americans would also buy the most gasoline ever — $490 billion worth. As of September 26, the average price of gasoline was $3.51, with California at $3.89 for the highest in the U.S., and Missouri at $3.21 for the lowest.

2012
Record High Gas Prices – The New Year brought with it the highest gas prices ever as reported by CNNMoney. Some analysts predict prices could come close to $5.00 per gallon in some areas. GasBuddy.com expects bigger increases coming and that the median U.S. gas prices will stand at $3.95 per gallon. Some cities could expect record high prices by Memorial Day, with Chicago residents paying up to $4.95 a gallon and New Yorkers up to $4.55.

Little Ben, A Self-Driving Toyota Prius – The Daily Pennsylvanian posted a story on April 1, 2012 about a self-driving car, Little Ben who successfully passes tests worthy of a driver’s license. The computer is considered a robot with computer vision. The car was created by Engineering Professor Daniel Lee at Penn State and a number of his colleagues in the School of Engineering and Applied Science, at Penn State in 2007.

2013
Hyperloop train is a new innovation rising on nearly airless tubes at 800 mph, the train will transport you from LA to San Francisco in just about 30 minutes. This new technology is in development by Hyperloop Transportation Technologies Inc.

Maglev trains are gaining popularity. A magnetic force lifts and propels the train using a minimal amount of energy compared to diesel-powered or electric-powered trains. These trains are already operating in Shanghai and Japan.

Autonomous vehicles  are being tested by Google. It now uses a fleet of about 24 Lexus RX450h  logging in about 500,00 mile son California roads. Other prototypes are also on the road.

Smart cars continue to make progress in an attempt to solve transportation problems in major cities.

Urban transport pods are being developed by Transport Systems catapult is a system where the human operator interacts with the pod using a touch screen in the windshield; which includes swiping to select a destination, and you can read the daily news, you can check can your email or even play a video game during the trip. The pod operates on its own, showing its current route. Similar pods are already being used in Masdar City in Abu Dhabi and at the London Heathrow airport under careful supervision.

2015
Apple has stated it is ready to expand the company into the car industry expecting to release its own car by 2019. Apple making a move into the car industry could represent one of the most important moments in the history of transportation according to investment analysts. The opportunity for tech firms to disrupt the auto industry is large enough to fundamentally and permanently change how investors view transportation.

2016
2016 may be remembered as the year humans were challenged to give up the steering wheel.  In  the past 12 months, Uber launched a fleet of robo-taxis in Pittsburgh, Google started talking about how to commercialize its autonomous tech, and an Otto truck hauled 50,000 cans of Budweiser across Colorado with an empty driver’s seat.