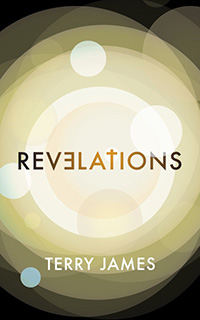 REVELATIONS • A Novel
A Very Special Book by Terry James!

A blind writer on topics involving prophecy receives a strange visit from a young news journalist. The TV anchor, Tyce Greyson, tells an eerie tale of supernatural dynamics acting upon his life. His trip to the Temple Mount in Jerusalem, then to the Isle of Patmos in the Aegean, sets in motion astonishing intrigues of profound impact upon his career –upon Israel, and upon the whole world. The blind writer gets wrapped up in the story in a twist that confirms it is all part of human history’s consummation. It is a story that both he and Tyce Greyson know must be told. All of humanity hangs in the balance.

“I’ve never sensed such personal closeness to characters in a work of fiction. It was as if Tyce visited me each early morning while the telling of the story unfolded. Somewhat disturbing, but very, very cool… as the young people would have it.” – Terry James

“I have always been one very wary of people who tell stories of supernatural experiences. I’m a stodgy old Baptist, i guess…or at least, very cautious about anything ‘Extra-Biblical.’ But, since I died clinically due to a ‘Widow Maker’ heart attack those 3 times on Good Friday, April 22, 2011, and was instantaneously in the presence of those Heavenly beings, I’m not so quick to condemn those who report supernatural things in their lives. The Lord has indeed shown me many things that was wrapped up in those glimpses into Glory. This novel is one of the inspirations I believed was injected into my spirit that Good Friday in 2011.”

“I hope many will read this novel with the understanding that, while fiction, it speaks to the magnificence of where all happening around us is rushing us toward a glorious future beyond comprehension. “

“Wow… Just finished reading this book. I must say it is a real page turner. I loved the way it transitions full circle from the prologue to the epilogue, from the first to the last chapter. There are many surprises interwoven in the book, just when you think you have gotten into the mind of the writer the book shifts. I loved the setting and the way Terry James articulates real Bible Prophecy throughout. A must read for anyone curious as the what the end of the age holds with a fictional twist on how it could play out.”

“Excellent novel…captures and holds your interest on every page. I am already a fan of Terry James so I had no hesitation on giving his novel a try. Enjoyed it, had a hard time putting it down, would recommend it.”

“From the first page to the last this book will feed your faith and prompt you to search further into Gods word for the truth of these last days. Thank you Mr James for a wonderful, faith affirming read and I recommend it to anyone prayerfully seeking He who is the Truth. Jesus Christ.”