The rapture is an event that will take place sometime in the near future. Jesus will come in the air, catch up all Christians from the earth, and then return to heaven with the Church. We believe this event will take place before the tribulation.

The teaching of the rapture is most clearly presented by Paul in the first books and Thessalonians and Corinthians:

“For the Lord himself shall descend from heaven with a shout, with the voice of the archangel, and with the trump of God: and the dead in Christ shall rise first: Then we which are alive and remain shall be caught up together with them in the clouds, to meet the Lord in the air: and so shall we ever be with the Lord. Wherefore comfort one another with these words.” (1 Thes. 4:16-18).

“Behold, I shew you a mystery; We shall not all sleep, but we shall all be changed, In a moment, in the twinkling of an eye, at the last trump: for the trumpet shall sound, and the dead shall be raised incorruptible, and we shall be changed. For this corruptible must put on incorruption, and this mortal [must] put on immortality” (1 Cor. 15:51-53).

In these passage Paul informs his readers that living Christians at the time of the rapture will be reunited with those who have died in Christ before them. In 1 Thes. 4:17 the English phrase “caught up” translates from the Greek word harpazo, which means “to seize upon with force” or “to snatch up.” This word is used 14 times in the Greek New Testament in a variety of ways.

Sometimes the New Testament uses harpazo with the sense of “stealing,” “carrying off,” or “dragging away” (Matthew 12:29; John 10:12). It also can have the meaning of “to lead away forcibly” (John 6:15; 10:28,29; Acts 23:10; Jude 23). However, for our purposes, a third usage is significant. This usage is that of God”s Spirit carrying someone away. We see this usage illustrated in Acts 8:39 where Philip, upon completion of the baptism of the Ethiopian eunuch, is raptured or “caught up” and divinely transported from the desert to the coastal town of Azotus. Similarly, the church will, in a moment of time, be taken from earth to heaven. It is not surprising that contemporary author Hal Lindsey has called this unique event “The Great Snatch.” (1)

People who like to figure these things out claim that “the twinkling of an eye” (1 Corinthians 15:52) is about one-thousandth of a second. When Paul says that all Christians who are alive at the time of the rapture will be changed “in a flash,” he uses the Greek word atomos, from which we get our word “atom.” The rapture will take place in the smallest division of time- one “atom” of time. In a flash, every living follower of Christ will be gone. (2)

Rapture critics like to claim that the word “rapture” is not located in the Bible. It may not be in the King James, but the word “rapture” is found in the Bible, if you have the Latin Vulgate produced by Jerome in the early 400s. The Vulgate was the main Bible of the medieval Western Church until the Reformation. It continues to this day as the primary Latin translation of the Roman Catholic Church. It was Protestants who introduced the word “rapture” into the English language from the Latin raeptius. It was Jerome’s Vulgate that translated the original Greek verb harpazo used by Paul, under the inspiration of the Holy Spirit, in 1 Thes. 4:17, which is usually translated into English with the phrase “caught up.” The leading Greek Lexicon says that harpazo means “snatch, seize, i.e., take suddenly and vehemently.” This is the same meaning of the Latin word rapio “to seize, snatch, tear away.” It should not be surprising to anyone, that an English word was developed from the Latin which we use today known as “rapture.” (4) 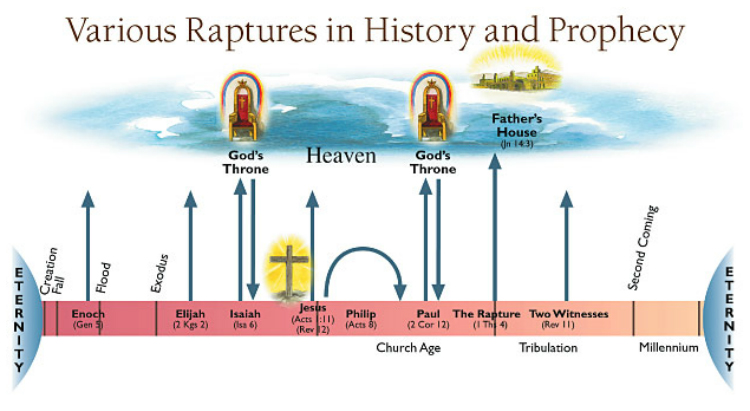