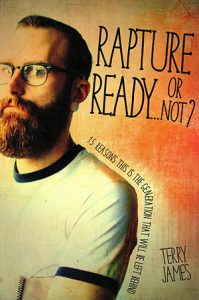 Rapture Ready…Or Not?
15 Reasons This Is the Generation That Will Be Left Behind
Exciting New Book by Terry James is NOW AVAILABLE!

Rapture Ready…or Not is for this generation of readers who are confused and look upon a world that seems to have destroyed opportunity for a bright, abundant future. The Rapture is about to catastrophically strike an unsuspecting world of both unbelievers and believers. Jesus Christ is the Shelter from the coming Tribulation storm of God’s wrath and judgment.

Jesus stated clearly that it will be “business as usual” right up until He catastrophically intervenes again in the affairs of mankind!

“Terry James, my long-time friend and colleague in the study of Bible prophecy, has captured the essence of why this generation is likely to be that left behind at the glorious moment when all born again believers are suddenly called into Christ’s presence. With most every signal given by Jesus and the Bible prophets pulsing in headline fashion across our hourly news, this book expresses the urgency of being spiritually prepared for prophetic things to come.

Rapture Ready…Or Not is a particularly prescient book for these troubling, though exciting time so near the end of the age.”
Dr. Tim LaHaye – Co-author of the Left Behind series

“Whether you are Rapture Ready…Or Not, Christ’s call to believers “Come up here!” is on the very brink of happening!

This new book by Terry James is the product of what Terry is convinced is Holy Spirit-given assurance by Heaven’s cloud of witnesses of Hebrews 12: 1-2 when his heart stopped three times and he experienced clinical death on three separate occasions Good Friday of 2011.

“Each of the three times I stood in the presence of those beautiful, cheering, young people continues to be with me during my every waking moment,” James says. “It’s the first thing in my thoughts each and every morning when I wake up. The thought grows stronger by the hour. They were praising God and at the same time letting me know through their jubilation that the Lord Jesus Christ is on the very brink of intervening into this darkening world.”

The author of Rapture Ready…Or Not? 15 Reasons This Is the Generation That Will Be Left Behind, has never been one who believes in ecstatic experiences in any extrabiblical sense. He says he now believes, however, that, within biblical bounds, God is increasingly opening Heaven’s communications in supernatural ways held in reserve until these crucial times just before the end of the Age of Grace.

“I have been shown beyond any doubt in my spirit what these three trips to somewhere on the periphery of Heaven was about,” says James. “The primary message I’m expected to deliver is that Christ is coming in the Second Advent to establish His throne on planet earth very soon. The Lord wants it known by as many as will listen that the Rapture will take place at least seven years prior to His Second Coming to put an end to the Armageddon warfare. Like it or not, believe it or not…that coming for us in the air is going to happen—and very, very soon.”

Of his more than two dozen published books, James says this is the one whose writing the Lord has most powerfully influenced, impressing his spirit in directing the writing process.

“Every impression I deeply sensed during this book’s preparation greatly enhanced my spiritual understanding of what the Bible tells us about things immediately ahead in mankind’s prophetic future,” says James. “The bottom line message I have received and am commissioned to convey is wrapped up in one word: “urgency.” The Rapture is on the very brink of taking place.

If you ever considered taking action in helping get a book widely distributed, this should be that moment. Pastors and Bible teachers across the nation who believe God’s Word is a 100 percent truth should be given a copy. Souls hang in the balance while preachers and teachers present God’s message in these closing days.

The author of Rapture Ready…Or Not? 15 Reasons This Is the Generation That Will Be Left Behind says, “My prayerful hope is that the message that Jesus wants many to come to salvation in these closing days, and for all believers to get their spiritual affairs in order will be spread quickly and thoroughly through this book. Time is rapidly running out.”

I urge you to order today to help the book achieve early visibility in the book market place. You can help support your favorite ministries that carry the book also by ordering from them.

Helping spread God’s message of the urgency of the hour to as many people of our circle of friends and family as possible—particularly to pastors and Bible teachers—is critical. I, for one, want to hear my Lord say to me in that day: “Well done, good, faithful servant.” I prayerfully believe that every person who names the majestic name of Jesus Christ also wants to hear those words from our Lord’s own lips.

You and I must help in sounding Heaven’s siren-forewarning. That’s what this book is all about!”
Jim Fletcher, Director of ProphecyMatters.com

Listen to the author read the Preface!