The Great White Throne Judgment is a trial, set in the future, for all people who have rejected God’s Call to salvation. Every person who has lived upon earth and has refused to accept God’s way to redemption from sin, will kneel before their Creator at this time, and acknowledge that He is God–that Jesus Christ is Lord.No person who has not been saved by acceptance of the Lord Jesus’ sacrifice on the cross will escape this horrifying judgment against sin. The Lord Jesus foretold of this moment.

Matthew 7:23
“And then will I profess unto them, I never knew you: depart from me, ye that work iniquity.”

Each will then be cast into the Lake of Fire, which will be their place throughout Eternity. (read Mark 9:43-48) The Great White Throne Judgment is found in the following:

Revelation 20:11-15
“And I saw a great white throne, and him that sat on it, from whose face the earth and the heaven fled away; and there was found no place for them. And I saw the dead, small and great, stand before God; and the books were opened: and another book was opened, which is [the book] of life: and the dead were judged out of those things which were written in the books, according to their works. And the sea gave up the dead which were in it; and death and hell delivered up the dead which were in them: and they were judged every man according to their works. And death and hell were cast into the lake of fire. This is the second death. And whosoever was not found written in the book of life was cast into the lake of fire”.

Although the word “throne” appears some thirty times in the Book of Revelation, this is a reference to a throne different than any previously mentioned, and accordingly, it is called a “Great White Throne.” Unlike the previous thrones on Earth or Heaven, it is pictured as being in space and occupied by the Lord Jesus himself. (1)

Romans 2:16
“In the day when God shall judge the secrets of men by Jesus Christ according to my gospel.”

Revelation 3:21
“To him that overcometh will I grant to sit with me in my throne, even as I also overcame, and am set down with my Father in his throne.” 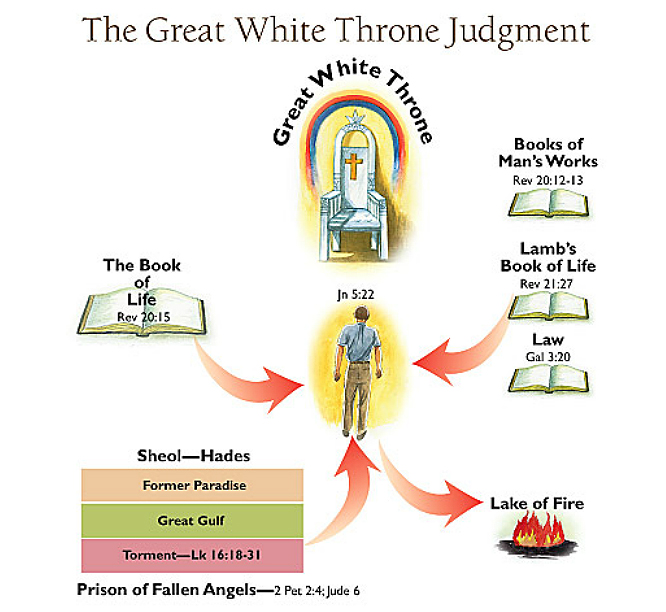 The Greatness of this Throne is not in the size of it, nor is it the number of the multitude who stand convicted before it, but in the greatness of the Judge who presides over it–the Lord Jesus. The white color is representative of His holiness and purity, and of how fitting it is that He should judge mankind. (2)

The Bible clearly states that Judgment will follow death.

Hebrews 9:27
“And as it is appointed unto men once to die, but after this the judgment:”

Our status in the Lord Jesus determines how we will be judged. Immediately following the Rapture, the believer will stand before the Judgment Seat of Christ.

2 Corinthians 5:10
“For we must all appear before the judgment seat of Christ; that every one may receive the things [done] in [his] body, according to that he hath done, whether [it be] good or bad.”

There, the resurrected saints will receive rewards for the good works they performed while on earth. But, this is far different from what will happen to the unbeliever, who will appear before the Great White Throne Judgment at the end of the Millennium. (3)

The Great White Throne Judgment is NOT for Christians. It is only for those who refuse to accept the Lord Jesus Christ in this earthly life. To avoid this judgment, all one must do is repent and believe in the name of the Lord Jesus Christ and invite Him to become his or her Lord and Savior. (2)

Romans 8:1
“[There is] therefore now no condemnation to them which are in Christ Jesus, who walk not after the flesh, but after the Spirit.”

Those who refuse the free gift wrought by the Lamb of God, will find that

Daniel 12:2
“And many of them that sleep in the dust of the earth shall awake, some to everlasting life, and some to shame [and] everlasting contempt.”

Acts 24:15
“And have hope toward God, which they themselves also allow, that there shall be a resurrection of the dead, both of the just and unjust.”

Salvation is not the issue, for those in this judgment are described as dead, meaning they are spiritually dead. They have no saving relationship with God and hence, no mediator.(3)

1 Timothy 2:5
“For [there is] one God, and one mediator between God and men, the man Christ Jesus;”

Those standing before the Throne come from all walks of life but are now being judged on the basis of their works. The judgment is based on what occurs in the books which record their works and whether their names are in the Book of Life.

The Book of Life contains the names of God’s elect. They will experience no condemnation nor judgment. They are not among the dead, for they are alive. (1)

The “dead, small and great” refers to those who have lived throughout history and, regardless of their stature or position, died without acknowledging and accepting The Lord Jesus’ payment for their sins. All remains of these deceased will be raised and united with their souls so that they can stand in a resurrected form before the Great White Throne.

Romans 2:5-6
“But after thy hardness and impenitent heart treasurest up unto thyself wrath against the day of wrath and revelation of the righteous judgment of God; Who will render to every man according to his deeds:”

After the unsaved are judged, another Book is opened, The Book of Life. The New Testament refers to this Book eight times, while three times the Old Testament mentions a Book in which names are written. (4) John says:

Revelation 20:15
“And whosoever was not found written in the book of life was cast into the lake of fire.”

The lake of fire is a punishment of everlasting torment prepared for Satan, his angels and all who refuse the gift of eternal life through the Lord Jesus.

Matthew 25: 41, 46
“Then shall he say also unto them on the left hand, depart from me, ye cursed, into everlasting fire, prepared for the devil and his angels:” “And these shall go away into everlasting punishment: but the righteous into life eternal.”

When this is completed, only one last event is scheduled for the Great White Throne Judgment.

Revelation 20:14
And death and hell were cast into the lake of fire. This is the second death.

In this way, the word of the Apostle Paul will be fulfilled: (4)

God eliminates sorrow, causes crying to cease and wipes away every tear.

Revelation 21:4
“And God shall wipe away all tears from their eyes; and there shall be no more death, neither sorrow, nor crying, neither shall there be any more pain: for the former things are passed away.”