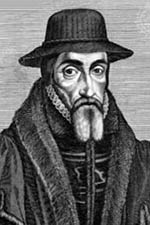 The Actes and Monuments, popularly known as Foxe’s Book of Martyrs, is a work of Protestant history and martyrology by John Foxe, first published in English in 1563. “After the Bible itself, no book so profoundly influenced early Protestant sentiment as the Book of Martyrs. Even in our time it is still a living force. It is more than a record of persecution. It is an arsenal of controversy, a storehouse of romance, as well as a source of edification.”