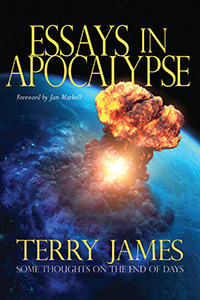 Terry James New Book Just Released! Essays in Apocalypse: Some Thoughts on the End of Days
by Terry James

Foreword by Jan Markell, president of Olive Tree Ministries and host of the nation-wide radio program aired on more than 830 radio stations across America.

The book delves into all aspects of where this generation stands at the very end of the Church Age. Terry James opens with three areas of interest much on the minds of those who intensively examine the issues and events of these closing days.

This is a book that presents a day-by-day, week-by-week overview of Biblical prophetic progression. Each brief essay dissects most every area of things going on that might relate to Christ’s imminent call to the church in the Rapture and of the stage-setting for the most horrendous time of all human history –the Tribulation.

Events are aligning as mankind spirals into anger, war, fear, and hopelessness. Nations are at odds with populism and globalism. Political leaders and dictators vie for power and influence. Looking back, you wonder “how did we get here?” Yet, these events are only sign posts to the real future of mankind…the prophetic end of days. Globalism and Israel remain the two important factors to understanding key biblical prophecies. Signals abound that this generation is on the edge of experiencing a transition into the Tribulation. There may be no more dramatic proof that this sudden change is about to happen than what has resulted from the election of Donald J. Trump as president of the United States. In addition to being staunchly anti-globalism, Trump is stridently pro-Israel; moving the American Embassy from Tel Aviv to Jerusalem is proof.

Terry James shares a collection of pivotal essays from 2015 to 2017 that reveal and highlight the prophetic clues that have brought us to this point in the countdown to a coming judgment. It all comes down to a single question — are you prepared for what is to come?

A tense world struggles in chaos…and the clock is ticking!

“As usual, Terry James brought his impressive knowledge of what the Bible has to say about the End Times and related it to current events in a clear and concise manner. This is something that characterizes every one of his books I’ve read in the past and makes each one a real page-turner, hard to put down once one has started. I can’t recommend it strongly enough!“

“Wow! I don’t even know how else to say it. I have read the Left Behind series when I was in high school. As much as I know that this could happen, I never really thought much more of it. This book brought all the events that have been happening to a new level for me. I have had my eyes opened as well as my mind! This book has made me sit back and think more than any other. It is not a fast read, but rather a very thought-provoking read!”